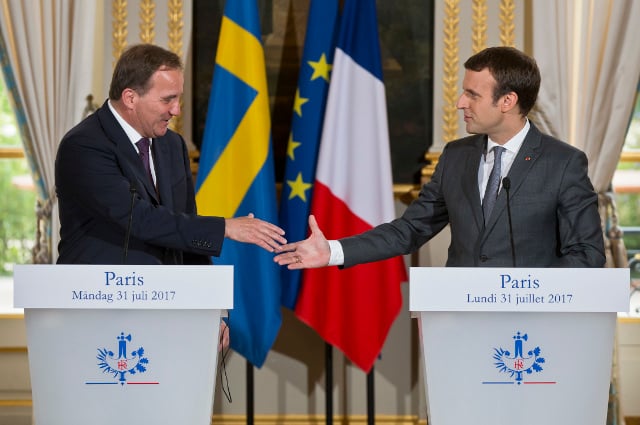 Speaking alongside Löfven after the meeting between the two at the Elysée Palace on Monday, Macron opened his statement by heaping praise on Sweden.

“Sweden has managed to develop its social model without ever betraying it, reconciling a competitive model with real demand for social justice,” he said.

“I have always considered what some call 'the Swedish model' a true source of inspiration in many respects,” France's President continued.

Some of the subjects the two leaders discussed in the French capital included the EU, climate change and migration.

“Sweden took on more than its share of responsibility by receiving more than 160,000 asylum seekers in 2015 alone, and its appeal for solidarity in this area in the European Union has been heard,” Macron noted in reference to Sweden taking in a record number of asylum seekers that year.

“I would like a more pro-active policy in this area, based on serious policy reform when it comes to the reception and administration of asylum seekers in France and urgent reform of European asylum policy,” he continued.

“We have talked about the need to better manage the migration flows to Europe. This is obviously a key issue for both our countries. The European Union urgently needs a new common asylum system built on shared responsibility between all the Member States. We also discussed ways to address all the root causes of migration, including in countries in sub-Saharan Africa where both France and Sweden have a presence,” Löfven said in his statement.

“I want to commend President Macron on his leadership on climate change,” the Swedish PM added, before going on to announce a new “deep innovation partnership” between Sweden and France.

“Some of the areas we would like to cover in this partnership are cooperation on clean energy and climate-smart transportation, and of course also an exchange of best practices to create favourable conditions for startups. So by joining forces on innovation we can create jobs and also more sustainable economic growth, and tackle by that joint challenges such as climate change more effectively,” he concluded.