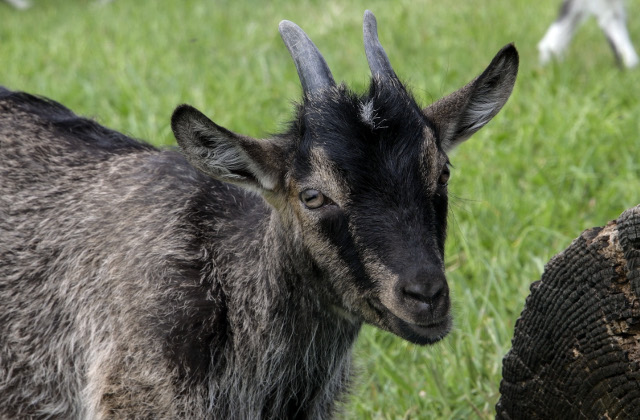 Hanif Mohammadi was surrounded by animals on his family's farm in rural Afghanistan when the Taliban killed his parents and forced him to flee.

Now, the 17-year-old is an asylum seeker in Stockholm and doing what he does best: herding goats.

Wearing running shoes, jeans and a light brown sweater with his pitch-black hair tied back, Mohammadi checks his smartphone just like any ordinary teen as he follows a flock of goats in the green meadows of Lidingö, an island in the inner archipelago of Stockholm.

“In Afghanistan, we had a lot of goats and sheep so when I came to Lidingö… I wanted to help out and learn a little Swedish,” he says.

He's been living in Sweden for a year and a half, anxiously waiting for his asylum request to be processed.

Mohammadi, who is from Helmand province, a Taliban stronghold, said the insurgents killed his father after he refused to join them. His uncle helped him escape before he ended up in Sweden.

“In Afghanistan, my life was really tough because I lost my parents… my family,” he tells AFP.

Holding back his tears, Mohammadi says: “I received a phone call last summer saying (the Taliban) had killed my uncle too”.

Surrounded by goats under a bright blue sky in Lidingö, Mohammadi is far away from the violence in his nation, in a home away from home.

And whenever he finds time off from school, Mohammadi joins his mammal friends.

He pulls down a tree branch to help the goats nibble on the leaves as one of the animals puts its front hooves on his waist to stand on its hind legs. Mohammadi bursts into laughter.

Henrik Ponten is the chairman of a community called “Get2Gether” which humourously refers to “get” (“goat” in Swedish).

With help from volunteers and asylum seekers, the community focuses on the conservation of an endangered Swedish goat species, whose milk is used to produce cheese at a factory in Lidingö.

“They're very competent and good at herding because they've done it before,” he adds. “More importantly, they get to contribute to keeping Sweden beautiful.”

While the asylum process can take more than a year on average, a majority of Afghan minors have their applications approved, according to the Swedish Migration Agency's 2016 figures.

Around 1600 asylum applications by Afghan minors were submitted to the agency by the end of November 2016. Around 500 were rejected.

In a security assessment published earlier this month, the agency deemed some regions in Afghanistan such as Panjshir, Bamiyan and Daikundi “less dangerous” despite “increasing violence” in the war-torn country.

The migration agency said that not everyone from Afghanistan will “automatically receive protection in Sweden” despite “a gradual deterioration” in security.

“There is a lot of fighting there, that's why I fled,” Mohammadi tells AFP.

“You'll get killed if you go there.”

He's been in Sweden for 18 months and while he waits to be granted a permanent residency to start a new life, herding is an opportunity to put his skills to use.

“I know how to take care of goats (because) I'm used to being around them,” he says as he giggles at one of the bleating animals.

Sweden, which in 2015 took in the largest number of refugees per capita in Europe, is a popular destination for young asylum seekers because of free education and health care.

Hanif Mohammadi, who never went to school in Afghanistan, says he wants to continue his education in Sweden.

Mohammad Ali, who also attends school in Sweden, says he dreams about becoming a pilot.

“But we'll see what will happen to me.”