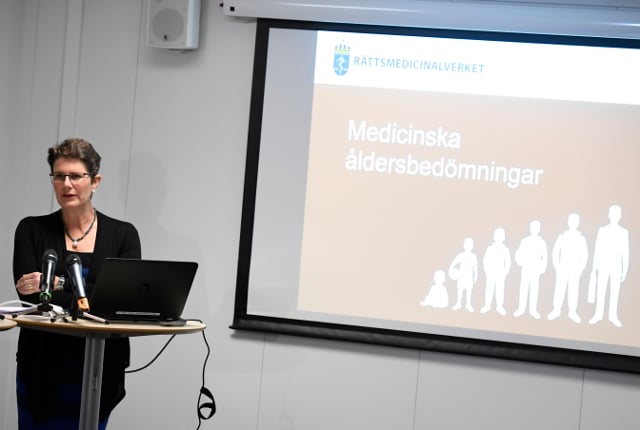 Sweden's national Forensic Medicine Agency (Rättsmedicinalverket) started carrying out the tests earlier year. They are designed to make age assessment during the asylum process more accurate after the Swedish Migration Agency (Migrationsverket) was criticized for failings in assessing the correct age of some refugees claiming to be underage.

To date Migrationsverket has sent 6,880 cases to be tested, and the Forensic Medicine Agency has now released the results of a total of 2,481 tests from the period between mid March until July 31st, 2017.

Eighty percent (2002) were judged to be 18 or over, while in a further 25 cases the Forensic Medicine Agency judged that the subject was “possibly 18 or over”.

In 432 cases the conclusion was that the person is “possibly under 18”. The tests are only carried out in cases where the person's age is in question.

According to Johan Göransson from the Forensic Medicine Agency, the results are consistent with previous months.

“We see no big difference in the statistics from previous months, the numbers are quite consistent,” he told The Local.

The high proportion of cases judged to be over 18 does not necessarily mean that the asylum seeker lied about their age. In May, the agency released the results of 581 tests and said that there were 442 instances that “suggest the person examined is 18 years or older”.

When newspaper Svenska Dagbladet investigated the 581 results released however it found that in 243 of the cases the person had openly stated that they turn 18 this year.

The method of medical age assessment, which consists of taking X-rays of wisdom teeth and MRI scans of knee joints, then having dentists and radiologists analyse them, has also been criticised in some quarters.

One sceptic is Karolinska Institute endocrinologist Claude Marcus, whose work includes assessing the biological maturity of people to see if they went through puberty earlier or later than usual.

“I've had reason to think about this, and I don't think the type of measurement being used should be. Judging biological age in this way is very uncertain. If we can't say it for sure we shouldn't pretend that we can,” he told newspaper Metro.

The Forensic Medicine Agency’s Göransson defended the accuracy of the tests however:

“In general you can say that the risk of inaccurately judging a child to be an adult is small. The biggest risk is if the person is just under 18, in which case it's around 10 percent”.