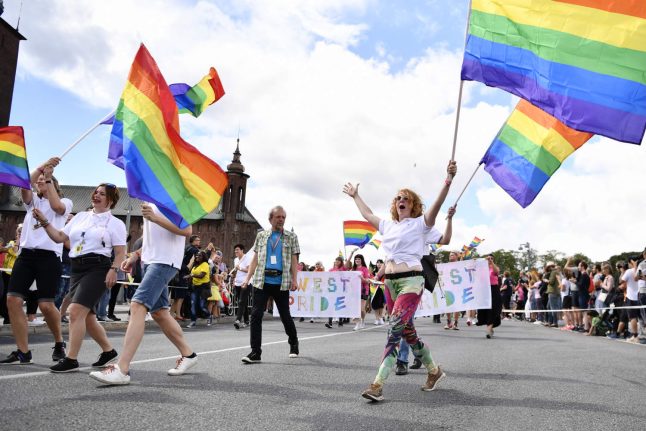 The parade, which passed through the Swedish capital’s Östermalm neighbourhood, was briefly stopped at around 2:45pm by right-wing extremists, reports news agency TT.

The group that interrupted the march is thought to be connected to right-wing extremist network Nordisk ungdom (Nordic Youth), according to a report by Aftonbladet.

“They interrupted the programme and stopped the parade temporarily,” Mats Eriksson of Stockholm Police told TT.

Eriksson confirmed that the people were “protesting” but declined to say whether they belonged to any particular group.

“They had different opinions from those taking part in the Pride parade,” Eriksson said.

The individuals in question were subsequently escorted away from the area and one or more of them has been placed under suspicion of disturbing the peace. No arrests have been made at the time of writing.

Three additional individuals not taking part in the event were also asked to leave the area due to “interfering,” Eriksson said.

The three left the area without any further disturbances, the police officer added.

Over 45,000 people took part in the parade while hundreds of thousands of supportive Stockholmers and tourists looked on as the Pride parade made its way through the city.

Taking place under heavy grey clouds and splashes of rain, music pulsated through the streets of the Swedish capital as the smiling participants paraded in the city.

“Pride is one of the best things all year! It’s so wonderful! The atmosphere and the people,” Gabriella Palm, attending her 9th Pride parade, told TT.

Palm said that Pride was all about accepting all individuals for who they are.

“Whether you’re one thing or the other, you should just be who you are,” she said.

Fellow participant Fredrik Brandt, who has attended Pride since 1998, told TT that the event also played a role in protecting the rights of individuals.

“First of all, it’s great fun. But of course we must defend our rights. We can’t take anything for granted. As recently as yesterday we saw on TV a man being abused because was gay. It still happens. Those forces and views exist in society. So it is good to demonstrate,” he said.