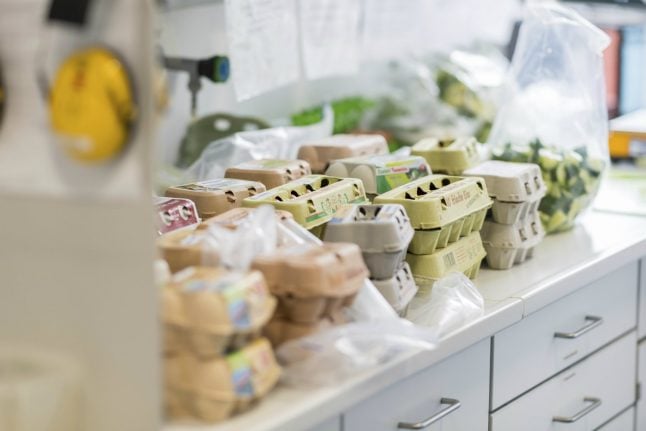 Eggs waiting to be tested in Germany. Photo: Guido Kirchner/DPA/AP/TT

Sweden’s National Food Agency (Livsmedelsverket, NFA) says that it cannot be certain how many of the eggs have already been sold to Swedish consumers, but stressed that they are not dangerous to eat, reports news wire TT.

Millions of eggs contaminated with the pesticide Fipronil have been withdrawn from sale in the Netherlands, Belgium and Germany. Around 180 producers in the Netherlands have been forced to put their operations on hold and many have also culled livestock, according to the report.

The NFA received on Friday notification from the EU’s warning system that some of the affected eggs had been shipped to Sweden.

“The eggs have been delivered to a small wholesaler, who has received a delivery from a supplier who has been found to be linked to one of the closed farms,” NFA inspector Petra Fohgelberg told TT.

The shipment in question reached Sweden yesterday but did not make it to any shops or restaurants, writes TT.

Fohgelberg added that it was possible that the pesticide-containing eggs have been part of previous shipments.

“Tracking work on previous shipments is ongoing,” she said.

But Swedish stores are unlikely to have any of the affected Dutch eggs on their shelves, said Axel Lagerfelt, spokesperson with industry interest group Svenska ägg (Swedish Eggs).

“Eggs sold to consumers on stores are almost 100 percent Swedish eggs,” he said.

Companies that have bought the eggs as raw materials, for example for the mayonnaise production, are more likely to have stocks of the bad eggs.

“If the eggs have an ‘SE’ stamp then you can be certain that it is a Swedish egg,” Lagerfelt said.

Stamping also applies to foreign eggs, so those originating in the Netherlands, Belgium and Germany can easily be identified.

Criminal investigations into the issue have begun in both Belgium and the Netherlands.

If consumed in large amounts, Fipronil can be harmful to the liver, thyroid gland and kidneys and is banned from use in food production in the EU.

But there is no cause for Swedish customers to be concerned, according to Fohgelberg.

“There is no implicated health risk for Swedish consumers that have eaten the eggs,” said the NFA inspector.

“We have carried out a risk assessment based on the highest levels found in these eggs and also on eating habits in Sweden,” she added.

READ ALSO: What you should know about the 'toxic eggs' found in 12 German states