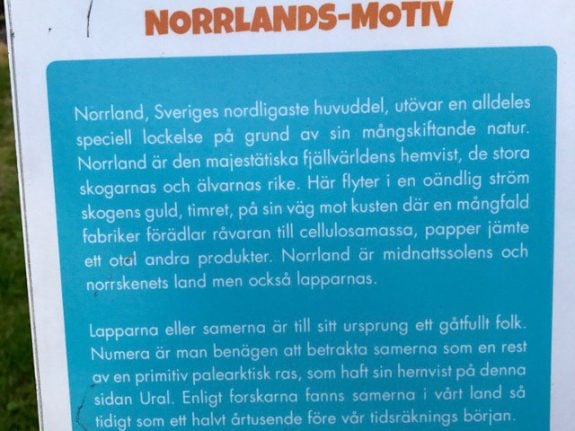 The section of the sign in question. Photo: Max Entin

Swedish media picked up on the sign after Max Entin, who was visiting the park, shared it on Twitter along with the caption “Earlier in the summer we visited Äventyrsland in Halmstad. Here is their view of Sami people”.

The sign, placed in the 'Miniland' part of the park where there are miniature representations of Sweden, starts by giving a general description of northernmost region Norrland, before going on to say “Norrland is the country of midnight sun and the Northern Lights as well as the Lapps”.

“The Lapps or Sami are a mysterious people in their origins. Nowadays one is inclined to regard the Sami as a remnant of a primitive Palearctic race who had been living on this side of the Ural mountains,” it continues.

“I was surprised this kind of text could be found on such a newly written sign,” Entin explained to The Local about his decision to share the photograph on Twitter.

Stefan Mjellander, who works in the marketing department at Halmstad Äventyrsland, said the text is old and was accidentally transferred to the new sign in 2015.

“The texts on our signs and decorations are old, and there was a mistake when we took the old material in 2015 and copied the text to the new design. Our attention was drawn to the contents when Aftonbladet called. We don't know who wrote the original text as it came from the previous owner, but the sign has been taken away and will be changed next season,” he told The Local.

“The reason why we didn't notice it earlier is simply that no one said anything before, and our various signs in Miniland are about buildings, so never in our world did we think there would be this kind of description of the Sami. It's a mistake from our side. It's of course unfortunate and we don't agree with the view of the Sami that the sign describes.”

“We apologize to everyone who saw the contents of the sign and we have taken action,” he concluded.

In March, Sami language broadcasters Sameradion and SVT Sápmi ran a three-day campaign encouraging people with a Sami background to share the everyday racism they have experienced both online and in person in Sweden.

“It could be for example if a Sami person is called a 'Lapp', a word that we don't use about ourselves,” the project's head Katarina Hällgren told The Local at the time.

“Things a person in the majority says that they don't think are problematic, but leave the person subjected to them feeling uneasy. In many cases this is done through ignorance and through reproducing stereotypes.”