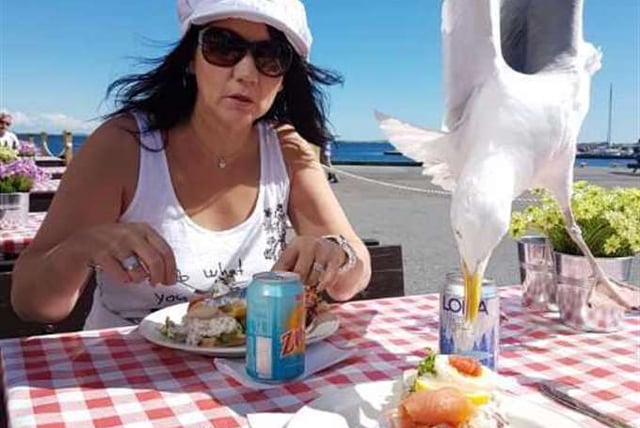 Waiter, there's a seagull in my food. Photo: Lars Lindehaven

Thousands of tourists flock to Smögen island on Sweden's west coast every year to enjoy its traditional fish market and prawns. Unfortunately, where there's fish, there are also seagulls.

Lars Lindehaven and his wife Anne-Marie, both from Piteå in northern Sweden, had an unforgettable moment when they took a road trip to the island and decided to order a pair of scrumptious seafood sandwiches.

The seagulls were already circling overhead and when Lindehaven took out his camera to snap a relaxed holiday picture of Anne-Marie and their lunch, the huge seagull suddenly decided to swoop in for a bite.

“I was going to take a picture of my wife, the food and surroundings. At that exact moment, the gull attacked. It was a moment's work. It aimed for the unprotected plate and managed to nick some fish roe before we chased it away,” he told regional newspaper GT.

Lindehaven managed to take the picture at exactly the right moment.

“It was just luck,” he told The Local. Is this the best picture this summer? We think so. Photo: Lars Lindehaven

In case you're wondering: most of the sandwich was still there, so Lindehaven, an IT engineer, cut off the piece that the seagull had attacked and was able to eat the rest.