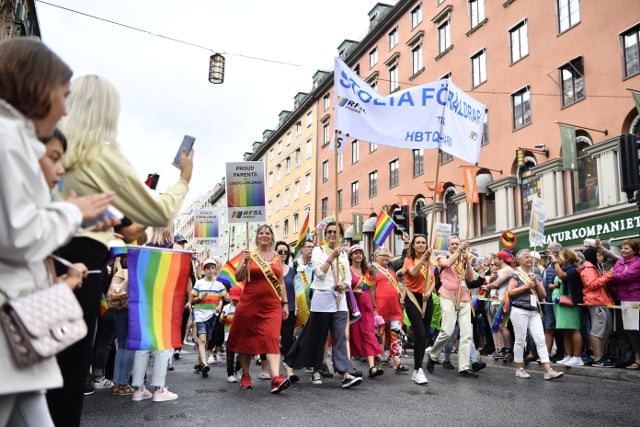 It must have been at the start of the new millennium. Our family stood and watched the Pride parade, that spectacle you had only heard people talking about before. Among the colourful floats they came down, those Proud Parents (Stolta Föräldrarna). I remember that I was deeply moved and that it made my eyes water. Many years later I went myself for the first time in the parade together with the Proud Parents of LGBT children and I myself became overwhelmed with all the warmth from the spectators.

IN PICTURES: Tens of thousands join pride parades in Stockholm and Malmö

Families with LGBT kids are norm-breakers, and in comparison with other countries Sweden has come a good way along the road when it comes to acceptance and openness for norm-breaking lifestyles and identities. But we still haven’t reached the final destination. There are still laws that have to be revised, authorities that are lagging behind, and rules that to this day are built on hetero and cis norms.

The law is important, since it can work as a guideline for the general public’s values which often change in its wake. So there are still things left to do, and just because we are in many respects on the right path does not mean that we're allowed to sit back and feel content – political winds can change, and with them so too can the law and values be led in the wrong directions. So long as norm-breaking kids are born, Proud Parents will be needed. We are going to take part in the debate for those who can't yet, we are going to challenge norms, and we are going to walk in the parade.

But do you have to walk in the parade? Do you still need to? Those questions come up sometimes, because the existence of Proud Parents hinges upon a paradox. We exist, and as a result we will therefore maybe not be needed one day.

Earlier this year Proud Parents across the country received an award for the RFSL (Swedish Federation for Lesbian, Gay, Bisexual, Transgender and Queer rights) activities of the year. The explanation read:

“This year's prize winner is the loving and tear provoking part of many pride parades, what many LGBT people hope for maybe most of all, and that which should be the most natural”.

I think that answers the questions. We are needed, because we move people and are a natural thing! That's why we walk in the parade this year. And who knows, maybe another young parent will be touched and moved when a deep enlightenment sinks into their heart – I'm going to walk there one day.

This is a translation of an opinion piece written in Swedish by Linda Wainwright Höckerfelt originally published by Metro.