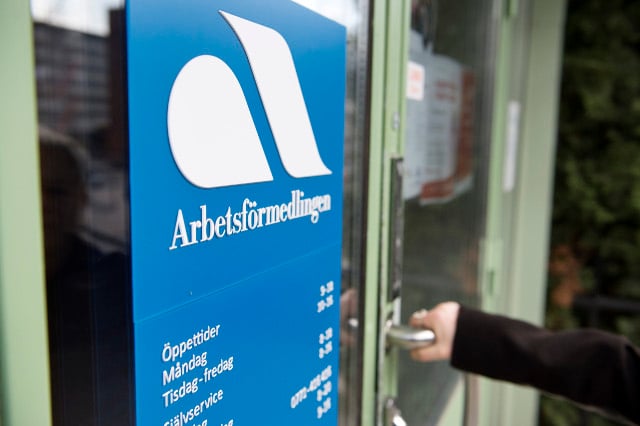 In its most recent monthly statistics, Arbetsförmedlingen revealed that as of July 2017 unemployment was at 7.3 percent – the same as July 2016.

Breaking the numbers down according to where job seekers were born shows a disparity however: unemployment among those born in Sweden was 3.9 percent, while it was 21.8 percent for those born abroad.

And as of July there were a record 76,561 people registered in the agency's Introduction Programme (Etableringsuppdraget) for unemployed foreigners compared to 59,362 a year before. The programme involves creating a plan tailored to each individual newcomer to the country according to their work experience and education in order to equip them for further education or work.

“Many lack an education that is viable in the Swedish labour market. At the same time, too few are choosing to study during their time in the Introduction Programme. As such, it's important that we can motivate more to choose an education that can lead to employment,” Arbetsförmedlingen head analyst Annika Sundén said in a statement.

In April, the office of Sweden's Minister for Employment and Integration Ylva Johansson told The Local that providing newcomers with the tools to establish themselves in the Swedish labour market through schemes like the Introduction Programme will be key to their integration.

“Integration means people coming to Sweden being given the right conditions to establish themselves within and become a part of Swedish society. It’s about having respect for basic Swedish values and also having the right opportunities to establish yourself in Swedish society. The chance to learn the language and start working,” Johansson’s press secretary Natalie Sial explained at the time.

The increase in people registered with the Introduction Programme this year can be explained by Sweden’s Migration Agency (Migrationsverket) managing to work through much of the backlog of asylum applications from the record 163,000 people who sought asylum in the country in 2015.

The total number of people registered as long-term unemployed in Sweden meanwhile (defined as being unemployed for 12 months or more) grew from 142,499 to 145,896 between July 2016 and July 2017. People who are part of the Introduction Programme, which can take up to two years to complete, are included in that statistic and account for the majority of the increase.

At the same time as the number of people it deals with increases, Arbetsförmedlingen has raised the alarm about poor finances, telling Swedish daily Dagens Nyheter that it will need 600 million kronor ($74 million) more from the government in 2018 than currently allocated, and 900 million kronor more in 2019.