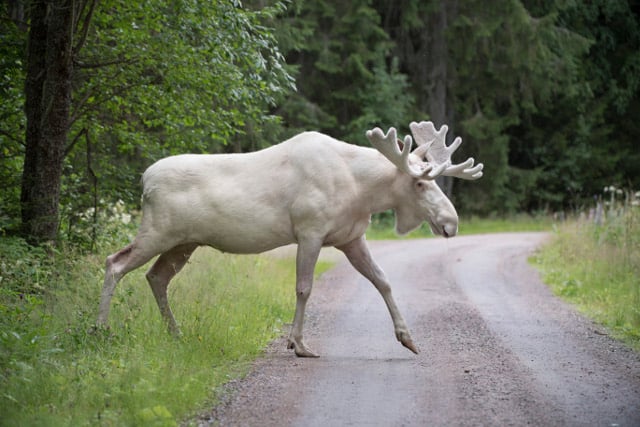 Hans Nilsson had been trying to spot the rumoured white elk in Eda, western Sweden for a number of years. He finally achieved his goal for the first time last week, and for the second encounter a day later he made sure to bring his camera.

“This white elk bull is local to the area. I saw it the evening before too, that was the first time. On Friday evening when I shot the video everything fell into place, the location, the light and the calmness,” Nilsson told The Local.

It proved to be worth the effort. The video of the unique animal has been picked up by the likes of the BBC and MSN, earning thousands of shares on social media. Nilsson won't forget the sighting any time soon:

“It was an experience to meet such a stately animal up close”.

This is the second Swedish sighting of a white elk to make headlines this summer. In July, Jessica Hemlin also photographed one of the rare animals, a regular visitor to her back garden in Munkedal, western Sweden.

“It's really special. It's a powerful feeling,” she told The Local at the time. White elk can be explained by two conditions: one is albinism, while the other is leucism, a genetic variation which changes the colour of the skin and fur but unlike albinism, does not change the eyes.