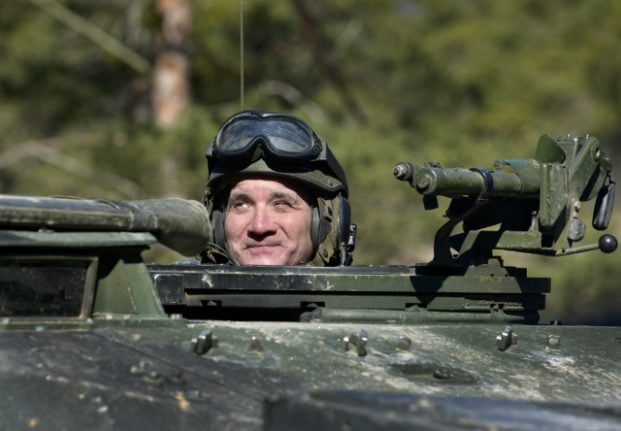 “This is a good sign of political stability and vision. It's good for the Armed Forces, an important signal to the world, and good for Sweden,” Defence Minister Peter Hultqvist said while presenting the deal at the Rosenbad government offices on Wednesday.

Along with junior coalition partner the Green Party, the Social Democrats were joined by the Moderates and the Centre Party in negotiating the deal.

Moderate leader Anna Kinberg Batra had hinted during her speech at the annual Almedalen politics week earlier in the summer that the party could leave the talks if they were unsatisfactory, and the Alliance coalition is split on the matter. The Christian Democrats ended their participation in the negotiations earlier this week, and the Liberals did not take part at all, as was the case last year.

Wallmark insisted however that leaving would have meant a worse deal:

“This means we get more money for the Armed Forces and in doing so strengthen their capacity. I also think it's an important signal to the world.”

The money will be spent on among other things purchasing new vehicles and ammunition for the military, an increase in the number of positions available in officer education as well as basic training, and more soldiers.

Green Party defence spokesperson Anders Schröder thanked “the whole group for a constructive and good environment of cooperation”. That despite the fact that Defence Minister Hultqvist is the subject of a planned no-confidence motion by the centre-right opposition.

Asked if that is good for cooperation, Moderate defence spokesperson Wallmark deflected:

Swedish defence has been in sharp focus recently following an increase in military activity from Russia in the Baltic region. In June the Nordic nation summoned Russia's ambassador after a Russian SU-27 jet flew unusually close to a Swedish reconnaissance plane in international airspace above the Baltic Sea.

READ ALSO: Putin says Sweden in Nato would be 'threat to Russia'

Conscription has even been brought back to strengthen the number of troops in the Swedish Armed Forces, after recruitment drives failed to fill numbers adequately.