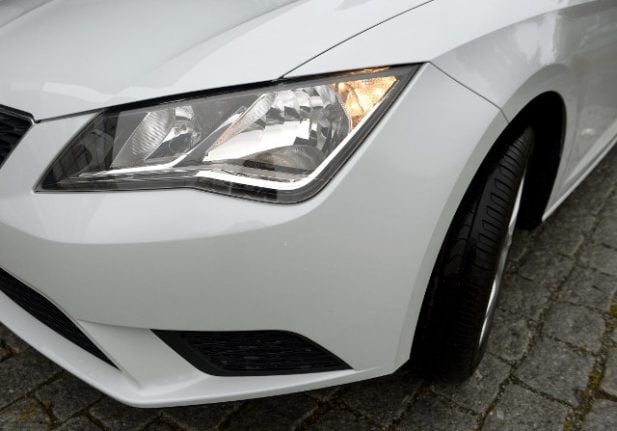 File photo not related to the story. Photo: Janerik Henriksson/TT

The man in Södertälje just south of Stockholm attempted to register a custom plate reading “A55ORGY” (we'll leave it up to readers to interpret that), but the Swedish Transport Agency (Transportstyrelsen) rejected it on the grounds that it could be considered offensive.

The man, who wished to remain anonymous, told public broadcaster SVT that he was inspired by a family member.

“My cousin in the USA has a similar one,” he said. “It’s a shame I got a no, but I'll come up with something even smarter.”

Transportstyrelsen's rules state that a personalized plate “may not be designed if it causes offence or harm to anyone else,” including allusions to alcohol, drugs, sex, swearwords, religion or criminality. How the Södertälje resident's plate would have looked. Photo: Jurek Holzer/SvD/TT (image manipulated by The Local)

Plenty have tried to get cheeky combinations past them regardless however, including some who were slightly more creative than the Södertälje resident in their efforts.

In February one attempt from Varberg reading “X32TTU8” (read it backwards to figure it out) was denied, while last year the same person attempted to get “3JOH22A” through unsuccessfully. A mock-up of how one of the Varberg man's personalized number plate attempts would look. Photo: SVT

A man in Nässjö meanwhile had a slightly more tame plate containing the combination “RUMPA” (‘butt’ in Swedish) rejected in June.

READ ALSO: 10 of the craziest custom plates banned in Sweden