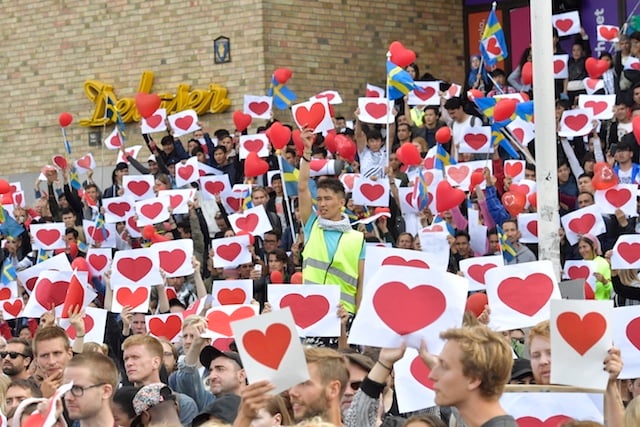 Photo: Jonas Ekströmer/TT
Participants in the Saturday demonstration formed a human chain in front of the youths in the Medborgarplatsen square in Stockholm, holding up white sheets of paper with red hearts on.
The lone refugee youths have now been protesting for nearly two weeks, demanding Sweden stop deportations to Afghanistan.
In an open letter to the Swedish Migration Agency (Migrationsverket) Director-General Mikael Ribbenvik they ask: “Is Sweden really a moral country when you say to Swedes not to travel to Afghanistan when it is dangerous, but you think it's safe for us young people to live there? It's not human.”
READ ALSO: 'When you leave your house in the morning you can't be sure you'll come home. That's what Afghanistan is like'
Having originally staged their protest outside the Riksdag (parliament) building, the Afghan youths were forced to move to Medborgarplatsen after they were attacked by right-wing extremists on August 8th.
“It feels as though you can choose between being passive or showing where you stand. And when it comes to children it's an easy choice,” 41-year-old protester Frida Beckman told TT newswire. Counter-protesters from the Facebook group “Stå upp för Sverige.” Photo: Jonas Ekströmer/TT
On the opposite side of Medborgarplatsen around 100 counter-protesters gathered, summoned through a Facebook group called “Stå upp för Sverige” (Stand up for Sweden). They chanted “Out with the scum” and “No Afghans on our streets.”
READ ALSO: Sweden rejects 'world's oldest refugee's' asylum application
There were no confrontations between the two sides, the police said, except two of the counter-protesters were taken away by police after they had mixed in with the youths and started chanting amongst them.