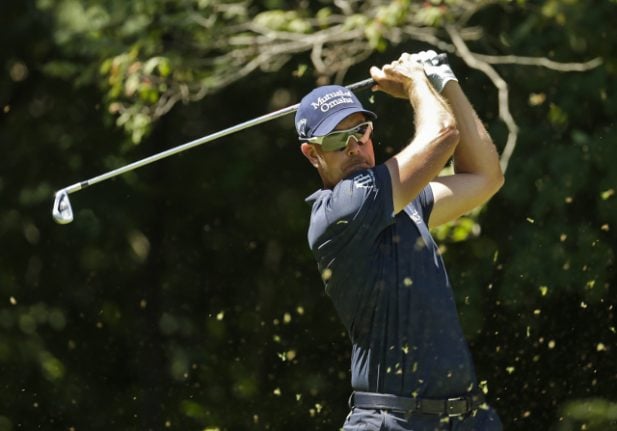 The 41-year-old from Gothenburg closed with a six-under 64 for a 22-under 258 total to set a tournament scoring record at the Sedgefield Country Club in Greensboro, North Carolina.

He won by one stroke over American Schniederjans, who roared to the finish with birdies on his final two holes en route to 64.

But Stenson matched Schniederjans hole-for-hole — both producing birdies at three of their last four holes.

Stenson drained a 40-foot putt on the par-four 17th to help seal his 17th international title including his sixth on the USPGA Tour.

“He pressured me right to the end,” Stenson said of Schniederjans. “It was a tight race. Luckily I was able to put my foot down and make a couple of birdies coming home.”

The win makes him the most successful Swedish player of all-time on the US Tour, surpassing Jesper Parnevik and Carl Pettersson who both have five.

“Feels good to inch ahead and get that 6th win,” Stenson said.

Stenson, who is ranked ninth in the world, is hoping to return to the form that saw him win his first major championship at the 2016 Open Championship at Royal Troon.

“I don't know how many times I'm going to be able to get close to playing as well as I did at Troon,” he said Sunday. “That was a performance of a lifetime and the scoring that we did showed that.”

Schniederjans's 21-under total of 259 gave him sole possession of second place, one stroke ahead of former US Open champion Webb Simpson, who shot a 67 for 262.

American Kevin Na was knocking on the door for much of his final round but a bogey on 18 left him with a 68 and dropped him into a tie for fourth with South Africa's Rory Sabbatini (64) and American Ryan Armour (64).

With six holes to play, Stenson, Armour, Schniederjans and Na all shared the lead.

Schniederjans had birdies on Nos. 17 and 18 and nearly produced an eagle on the final hole, but the ball rolled past the cup on his shot from the fairway.

Stenson's 22-under score topped the previous tournament record of 21-under 259 belonging to Kim Si-Woo and Pettersson. He also earned 500 points to vault into 23rd place in the season-ending FedEx Cup playoff standings.

This was the last tournament of the regular season before the playoffs, so several golfers needed good finishes to move into the top 125 in points to qualify for the playoff events.