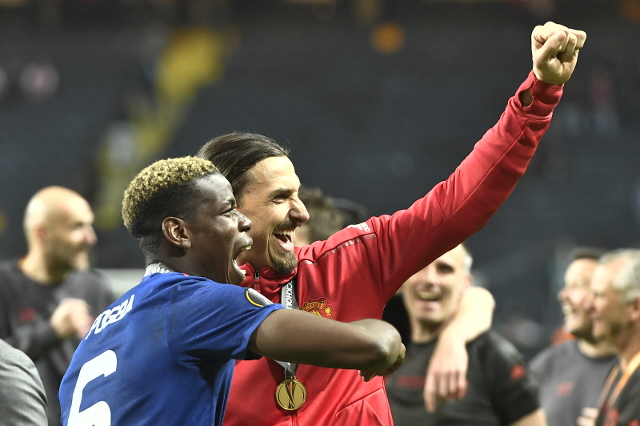 Ibrahimovic missed the final weeks of United's campaign after suffering ligament damage in a Europa League clash against Anderlecht in April.

But United manager José Mourinho remained in contact with the 35-year-old while he underwent his rehabilitation and the former Barcelona and Paris Saint-Germain forward has now agreed to return to Old Trafford.

“I am back to finish what I started. It was always mine and the club's intention for me to stay,” Ibrahimovic told United's website.

“I cannot wait to get back out on that Old Trafford pitch, but I also know that I have to take my time to make sure that I am ready.”

“I have been working hard and will continue to do so to make sure I am in the best possible condition for my return to the pitch.”

I UNITED it @ManUtd pic.twitter.com/2rgvuvoT0m

Ibrahimovic scored 28 times in 46 appearances in his first season with United, with his eye for goal and leadership skills helping Mourinho's men win the League Cup and march towards the Europa League title.

The Swede was injured by the time United beat Ajax in the Europa League final in his native Stockholm and both the player and his club agreed to let his contract expire at the end of the season.

But Mourinho was impressed enough by Ibrahimovic's first nine months with United that he made it clear he was open to the forward returning if his recovery went well.

Ibrahimovic, who was linked with a move to Los Angeles Galaxy earlier in the close-season, has been working with United's medical staff at the club's Carrington training base and his regime has been so successful that reports suggest he could be back on the pitch by late October.

On Sunday, Ibrahimovic, who will wear the number 10 shirt for United, posted a video on Twitter challenging his followers to guess which knee he had damaged as he showed off taekwondo moves on a punch bag.

Despite Ibrahimovic's encouraging recovery, which included the Swede being pictured diving off the side of a luxury yacht recently, the United boss won't rush his return.

“We are delighted Zlatan is on the road to recovery and we are equally delighted to have his ambition and experience back with us,” Mourinho said.

“After his contribution last season he deserves our trust and we will be patient waiting for him to return.”

“I have no doubt that he will be important in the second part of the season.”

Ibrahimovic made his debut for Malmö in 1999 and went on to play for Ajax, Juventus, Inter Milan, Barcelona, AC Milan and PSG.

He has won a trophy in every season since 2001, including 13 league titles.

In Ibrahimovic's absence, United have made flying start to the Premier League season.

Mourinho spent a British record £75 million to sign Everton striker Romelu Lukaku in the close-season and the Belgian's arrival has sparked United to win 4-0 against both West Ham and Swansea in their first two league games.