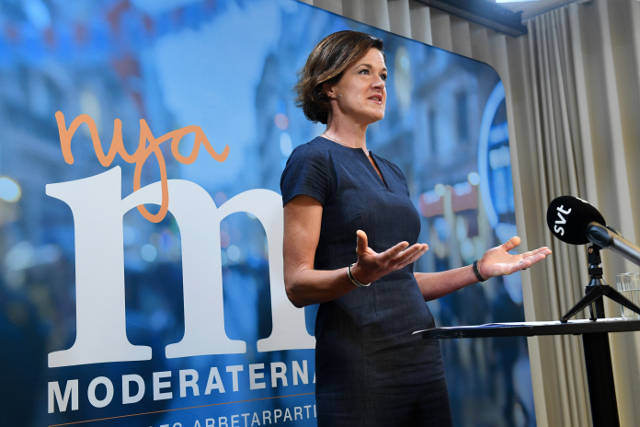 Kinberg Batra announced her resignation as head of the centre-right Moderates at a morning press conference, saying she had asked the nominating committee to call to an extraordinary meeting to elect a new leader.

The 47-year-old had faced heavy criticism in the past few months with the party plummeting in the polls. Heavy voices within the party, including 11 regional party districts and the Moderate youth wing, had called for her resignation ahead of her announcement on Friday, just months after she survived a previous push.

She told the press conference it was necessary for her to step aside so that the party could instead focus on issues and on winning back support from the voters in Sweden's general elections in September 2018.

“That is not possible right now. There are too many Moderates doing what can only be described as self-harm,” she said. “I don't think the voters are very impressed.”

ANALYSIS: Where did it all go wrong for Anna Kinberg Batra?

The criticism began after she announced in January that she would be prepared to enter into talks with the anti-immigration Sweden Democrats, in an attempt to put pressure on the Swedish government. The move backfired, resulting in dwindling voter support, and questions being raised about what the party stands for.

“It was the right decision. I regret nothing. It is easy being wise in hindsight,” said Kinberg Batra.

“Tackling difficult issues also means taking a few knocks. But I definitely do not regret my choices.”

Many had pegged Kinberg Batra to become Sweden's first female prime minister, but she had a tough task taking over from her popular predecessor Fredrik Reinfeldt, who stepped down with high approval ratings despite losing the 2014 election.

A poll this week suggested only six percent of voters backed her to be the next prime minister, compared to current PM Stefan Löfven's 24 percent.

The other three leaders of Sweden's centre-right opposition, known as the Alliance (Moderates, Centre Party, Liberals, Christian Democrats), were quick to offer their support to Kinberg Batra after her resignation speech.

“I have really appreciated working with Anna,” wrote Centre Party leader Annie Lööf, while Liberal leader Jan Björklund hit out at “coup makers” within the Moderate party and urged it to “close the door to SD”.

Kinberg Batra will remain leader until the party elects her replacement.