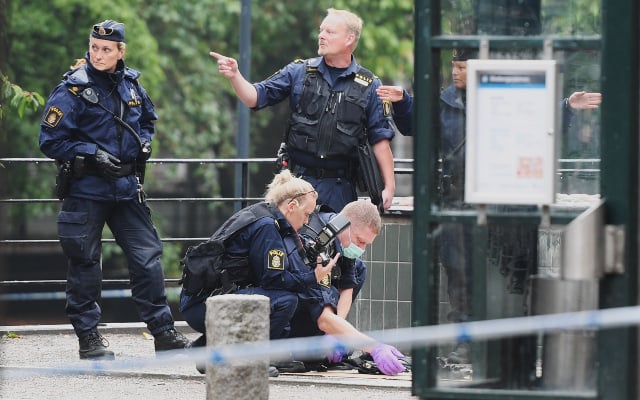 The incident occurred at around 10.40am on Thursday. A police officer at the scene told The Local that another officer was attacked with a knife at the busy square in Stockholm's Södermalm district.

“We can confirm that a police officer has been injured at Medborgarplatsen. One person is arrested,” Anders Bryngelsson told The Local.

A preliminary investigation into attempted murder was launched, and the officer's injuries were “not life-threatening”.

Just before lunchtime Stockholm Police said it was “calm at the scene” while witness testimonies were being heard.

The incident occurred near the Björns Trädgård subway exit, across the road from Medborgarplatsen.

The officer was attacked at this entrance to #Medborgarplatsen metro station. pic.twitter.com/A4CiAqDpvn

Public broadcaster SVT reports that an officer told them the attacker is “a man known in the area”.

It is not uncommon to see police patrols at Björns Trädgård, but there has been an increased police presence recently after a demonstration against deportations to Afghanistan was relocated there from another part of central Stockholm.

A police officer at the scene told The Local's co-founder James Savage that the protesters were not involved.

Police officer guarding a nearby demonstration against deportation of Afghan asylum seekers says the demonstrators were not involved.

The police officer injured in the attack was taken to hospital for treatment on minor injuries and was able to leave later in the day.