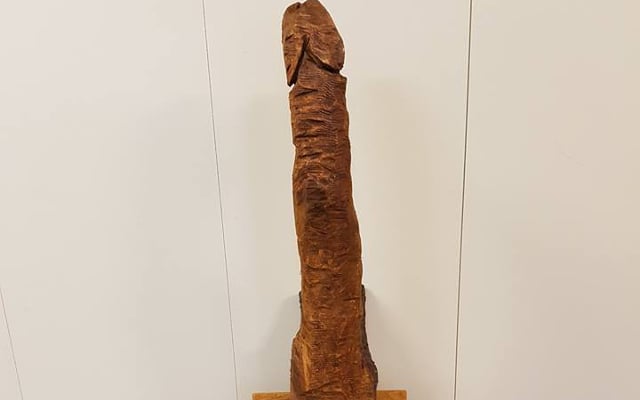 Hagfors, a municipality of around 12,000 people in the Värmland region in western Sweden, put out a call for help finding the owner of the carved object on Facebook earlier this week.

“We got a phone call from a resident who was visiting Blinkenbergs park. She explained there was a really huge penis sitting on a tree in the middle of the park. Our employees in the area went straight to the place to investigate, and sure enough, there it was. Over a metre long, and very well made,” Nathalie Andersson from Hagfors Municipality told The Local.

Incredibly, this isn't the first time mysterious wooden penises have reared their heads in Hagfors. An enthusiast – or group of enthusiasts – has been leaving the objects lying around for a while now. This one had by far the biggest length and girth however.

“It's not the first wooden penis we've found, but it's absolutely the biggest. We tend to find the penises here and there: often in the forest, or near swimming spots. But this time there was a huge penis sitting right in the middle of central Hagfors, in a popular park. All the penises are very well made, and the people or person who makes them has been putting a lot of effort into it. Sometimes they're lacquered, sometimes painted.”

The municipality has asked for help locating the artist (or artists) in the hope of returning the huge piece of wood to its rightful owner.

“We're still looking for the owner. It would be great to meet the person behind this creative piece of art. So far we've kept the penis in the municipality's central office, so if the owner wants it back, it's there in safe storage,” Andersson concluded.

READ ALSO: This is the man who created Sweden's massive snow penis