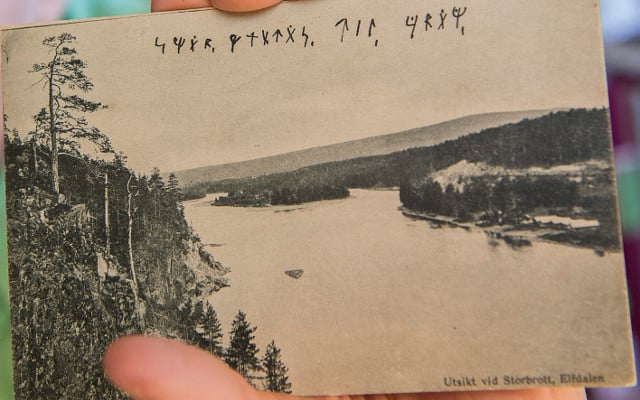 Elfdalian (Övdalian/Älvdalska) has a name that sounds like it came straight frm a Tolkien novel, but it's a real, North Germanic tongue spoken by 3,000 people in the Älvdalen area of Dalarna County in Western Sweden.

The language has its roots in Old Norse like Swedish, but developed in isolation since the Middle Ages and retains a number of archaic features not found in other Northern Germanic languages, including even Icelandic. It was written in rune form until 1900.

This summer, a course was offered in Älvdalen to help introduce newcomers to the language, and among the 26 participants were people from the USA, Czech Republic, Germany, Norway and Denmark.

Marc Volhardt from Copenhagen was one of the learners:

“It's a very complex language. It has a lot of the tones and grammar from Icelandic. It was a different, strange language up there I couldn't understand. Even more archaic in some ways than old Icelandic, so it was nice from a historical linguistics purpose, to be able to see further back than Icelandic, which was cool”.

“I have a Masters in linguistics and studied in both Copenhagen and Iceland, and learned Icelandic. I already had an interest in Nordic languages, and that gave me a nice insight into western Nordic languages. I've been going around the Nordics since I started studying and studied some Faroese at a summer course, so I got a feel for all the different Nordic languages but the last Nordic language I didn’t understand was Elfdalian, so that was kind of frustrating. That led me to wanting to know more about it,” he explained about his motivation to learn the tongue.

The introductory course was a week long, and involved grammar, exercises, and speaking sessions, while older Elfdalian speakers also came at the end of each day to hold conversations with the students:

“They were positive and happy about it. They seemed to think it was good that we wanted to learn. There was no 'this isn't your language', they liked it”.

“When foreigners come to Denmark a lot of Danish people ask 'why would you learn Danish when you can speak English?', but I didn't feel that in Älvdalen. The older generation want to preserve the language, they think it's a shame it's disappearing. I’m not sure the younger generation feels the same way yet,” Volhardt elaborated.

In the future he hopes to advance his skills and use them to try and research possible links between Elfdalian and the Sami languages. The latter tongues have a history dating back to around 1,000 BC.

“If I have time I'd like to work with the language and its revitalisation. I'd certainly give time to that. Out of personal interest I’d also like to learn more so I can understand everything, because after a week I certainly don't understand everything yet. I'd like to study some of the Sami languages more. There is the possibility that there are shared intonation patterns and theories that South Sami languages have given things to each other. We don't know exactly how they shared different words – that would be interesting to look into.”

Campaigners have long been pushing for Elfdalian to be officially recognized as a language in Sweden in the hope of preserving it for future generations. At the moment only 60 people under the age of 18 are estimated to speak the tongue, which means there's a real risk of it dying out.

The Swedish Government still treats it as a dialect, but Elfdalian was given a boost in May 2016 after being assigned an ISO language code. The codes, used to compile lists of the world’s languages, help the internet classify what is or is not a language.

“It's an important symbolic step for Elfdalian because this is de facto international recognition for it as a language,” Swedish language associate professor at Kristianstad University Yair Sapir told The Local.