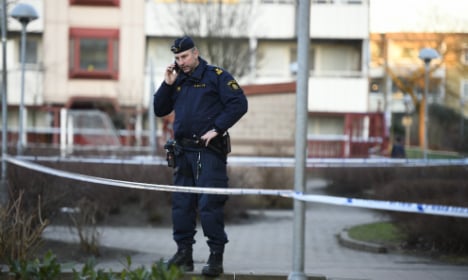 In 2016, some 250 shootings (random, fatal and non-fatal) were registered by police in Stockholm, Gothenburg and Malmö. In 2014, that number came to 200, indicating that Sweden is experiencing a drastic rise in such incidents.

“We don’t really know why yet, but what we can see is that the increase comes as we also see a rise in gang-related crimes and a growing number of criminal networks,” Manne Gerell, a criminologist at Malmö University, told The Local, after Swedish public radio first wrote about new research he is involved in.

One study which is yet to be published suggests that Sweden experienced four to five times as many fatal shootings per capita as Norway and Germany in 2008-2014, two otherwise similar countries. Previous figures have shown that deadly violence in general is going down in Sweden, but gun violence has gone up.

Gerell also singled out Malmö, Sweden’s third-largest city, as the one place where shootings are becoming particularly common.

“Malmö stands out,” he said, noting that the southern city is somewhat more exposed to social problems and poverty in comparison to both the capital and Gothenburg.

“Malmö is also what we describe an ‘early adopter’ when it comes to crime. It was the first of the three cities where hand grenade crimes became more commonplace and it was also the place for the establishment of Sweden’s first biker-gangs. We don’t know whether this is to do with its proximity to the European continent or not, but it could explain why the trends seem to start there.”

READ MORE: So… are they no-go zones?

Criminologist Joakim Sturup of the Karolinska Institute in Stockholm and who is researching the development together with Gerell, said that while Swedish police have steadily improved the resolution rate of violent crimes where firearms have not been used, the statistics related to firearm-related violence has headed in the opposite direction.

“In general, the resolution rate is between 40-50 percent on a national level, and 25 percent in the larger cities,” he said, referring to 2013 statistics of the number of fatal shootings.

“In Europe, reports show that when it comes to shootings per capita we’re now on par with southern Italy and some parts of Ireland,” he said.

Sturup said that there might be a link between the low resolution rate of shootings and the increase of those crimes.

“A shooting that is not resolved might then result in a revenge shooting, pushing up the number of incidents,” he said, underscoring the role that gang-related disputes could play here.

Swedish police have previously said that one difficulty when it comes to investigating shootings is that often, though not always, the victims are involved in gang conflicts themselves and therefore refuse to testify.

Amir Rostami, a sociologist at Stockholm University and a former police officer who is also one of the researchers behind the study, said that while it isn’t clear why the resolution rate of shootings is falling, police units more focused and specialized on these crimes, as well as stiffer penalties related to fire arms could potentially help curb the trend.

“I think that tougher new laws, like automatically charging a person carrying a firearm, is the right way to go.”

READ ALSO: How one of Malmö's roughest areas is edging out its drug gangs