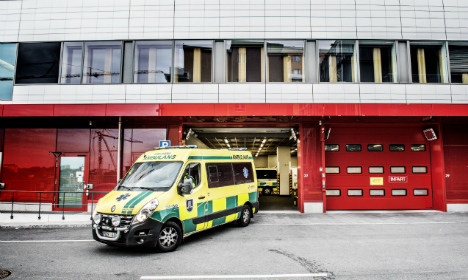 Cardiovascular disease represented 35 percent of all deaths in 2016, down from 46 percent in the year 2000, but still the dominant killer of both men and women in Sweden, a report from the National Board of Health and Welfare (Socialstyrelsen) said. Tumours were the second biggest cause of death.

The report underscored, however, that the number of young males aged 15 to 29 who die from gunshot wounds is still at an alarmingly high level. Even though that number fell in 2016, to a total of 19 cases compared with 23 in 2015, the government agency said the high rate is still a cause of concern.

“Shootings have taken the lives of significantly more young men in both 2015 and 2016 than previous years since the year 2000,” agency investigator Jesper Hörnblad said in a statement. “During the period 2000 to 2014, gunshot wounds caused the average of six deaths a year in this group.”

READ MORE: Why Sweden has more fatal shootings per capita than Norway and Germany

New stats: Swedish gun homicides among males 15-29y lower in 2016 than in 2015, but remain at unusually high level https://t.co/tyUmtyiKGP pic.twitter.com/e7P1YBvfdP

On Tuesday, a group of researchers studying shooting incidents in Sweden in recent years told The Local that the number has drastically increased, putting the Nordic country on par, per capita, with both southern Italy and parts of Ireland.

“We don't really know why yet, but what we can see is that the increase comes as we also see a rise in gang-related crimes and a growing number of criminal networks,” Manne Gerell, a criminologist at Malmö University, told The Local.

Criminologist Joakim Sturup of the Karolinska Institute in Stockholm said that a decrease in the police resolution rate of fatal shootings – 40-50 percent on a national level and 25 percent in the larger cities according to 2013 data – may explain the overall increase in shootings.

The good news showing through in Wednesday’s report, is that Sweden is seeing a decrease in deaths caused by drugs or medical cocktails, to 910 in 2016 from 950 the year before. Two-thirds of them were men.

“The medical- or drug-related cause of deaths increased during several years, particularly among young men. This negative trend might have been broken now. But the number of deaths is still high,” said Daniel Svensson, also an investigator at the national health board.

“Suicide is more common among men, but it has decreased in the past three decades. When it comes to women, the development has remained fairly stable,” Hörnblad said.