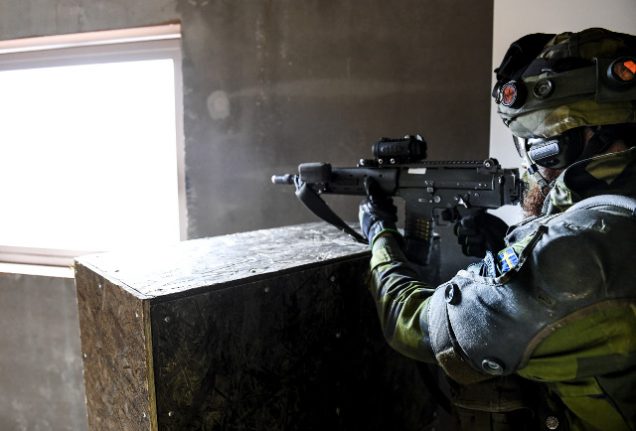 Taking place between September 11th and 24th, Aurora 17 involves a total of 19,000 Swedish troops, as well as 1,435 soldiers from the US, 120 from France, and other units from Finland, Denmark, Norway, Lithuania and Estonia. The exercise starts on Sweden's west coast and will also cover the Stockholm area, Mälaren Valley and Baltic island Gotland.

The first event, practising “Host Nation Support” in Gothenburg, involves testing the “capability of receiving and providing support to other nations, an important element at a time of crisis”, according to the Swedish Armed Forces.

Starting on September 11th and running until the 20th, around 1,200 Swedish personnel as well as 200 from French and US air defence units are taking part in the first phase at Gothenburg's Landvetter Airport, as well as the city's harbour and Hisingen island.

The show of force comes in a period where Swedish defence is in sharp focus following an increase in military activity from Russia in the Baltic region. In June, Sweden summoned Russia's ambassador after an SU-27 jet flew unusually close to a Swedish reconnaissance plane in international airspace above the Baltic Sea.

Sweden's coalition government recently agreed a new defence deal worth 2.7 billion kronor ($334 million) per year until 2020 with two of the centre-right opposition parties. Conscription has also been brought back to strengthen the number of troops available to the Swedish Armed Forces after recruitment drives failed to deliver results.

Aurora 17 will cost Sweden around 580 million kronor, about twice as much as the Armed Forces usually spends on military exercises in an entire year, according to SVT. The Swedish Government argues that a worsening security policy situation in Europe means that Sweden's defence capabilities and cooperation with other nations in the area need to be strengthened.

“Aurora is the biggest operation in 23 years where the army, air force and marines collaborate in a drill. The exercise is an important defence policy signal. It raises the threshold against different types of incidents and provides an important foundation for evaluating our military capabilities,” Defence Minister Peter Hultqvist said in a statement.

Sweden is not a member of Nato, but has strengthened ties with the alliance in recent years in the face of Russian warnings that an expanding Nato would be seen as a “threat”. The Nordic country has a Host Nation Support Agreement (HSNA) with Nato which means helicopters, aircraft and ships can be transported by members across Swedish territory upon Sweden's invitation.

In July, US Lieutenant General Ben Hodges, who is a commanding general of the US Army in Europe, singled out the importance of Gotland, saying “I do not think there is any island anywhere that is more important”.

READ ALSO: No island as important as Gotland, US military chief says

At the same time as Aurora 17 gets going, Russian and Belarusian forces are preparing to start their own major joint military exercise on September 14th. Zapad 2017 (“West 2017”) will start in Russian enclave Kaliningrad, then move to Belarus and finally into mainland Russia.