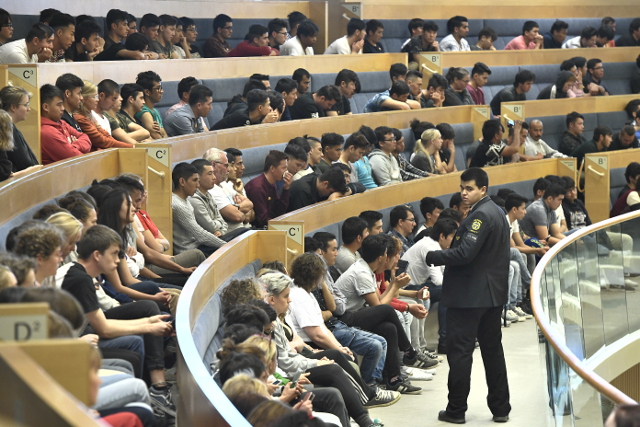 Many of the young refugees protesting deportations to Afghanistan watched the debate in the Riksdag. Photo: Claudio Bresciani/TT

Hundreds of young refugees watched from the gallery as a debate was held in the Riksdag on Wednesday over the situation for unaccompanied minors seeking asylum in Sweden. It follows a sit-down protest by young asylum seekers in Stockholm that started in August, where demonstrators argue that deportations to Afghanistan should be stopped because the country is not safe.

Among the speakers at the debate were Migration Minister Heléne Fritzon, who dismissed calls for an amnesty.

“Those who have an asylum application rejected must of course leave,” she said, insisting that Sweden has one of the most legally sound asylum systems and offers strong rights for asylum seekers.

The Green Party's migration spokesperson Maria Ferm argued however that a legal solution should be found so that the young Afghans who came as unaccompanied asylum seekers in 2015 can stay:

“Afghanistan is one of the world's most dangerous countries, and there are very few opportunities to start any kind of normal life for those who return there without a network”.

The Swedish Migration Agency's official stance on Afghanistan is that safety varies between the country’s different provinces and that “it is still possible to return to several areas”. Protesters at Mynttorget near the Riksdag on the day of the debate. Photo: Paul O'Mahony

Ferm said that long processing times at the Swedish Migration Agency was a problem for the youngsters, with many turning 18 by the time their case was was looked at, meaning they were therefore processed as adults despite arriving in Sweden when they were underage:

“We don't want to see thousands of young asylum seekers getting deportation notices, and we don't want them to get it this autumn after being made to wait several years for the decision”.

Migration Minister Fritzon said she does not believe new legislation is required in response however. From the opposition parties, the Sweden Democrats and Moderates defended the current system, while the Centre Party argued that a new solution is necessary.

“To date this year seven people from this group have taken their own lives, roughly around 100 have tried. I understand that may sound macabre but from my perspective you can't start anywhere but there when talking about this group,” Centre Party migration spokesperson Johanna Jönsson said.

Last week The Local spent 24 hours with the young refugees holding a sit-down protest in Stockholm over deportations to Afghanistan.

“It’s not about money, food or homes. There are still some homes and some food in Afghanistan, that’s not why we came here. We didn’t have security, freedom and safety – it's for those things that we came. That’s why we fled,” one of the protesters, Benjamin Fayzi, explained.