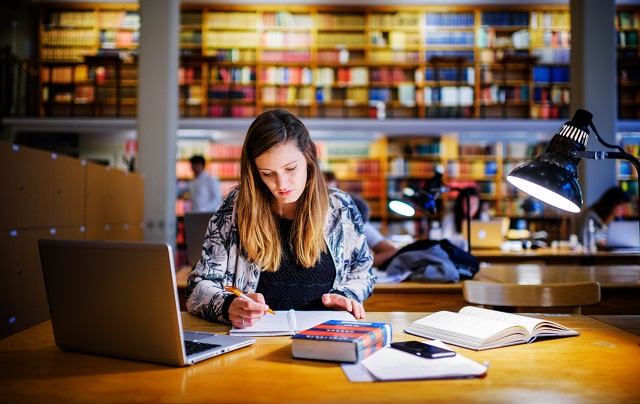 A student in a Swedish library. Photo: Simon Paulin/imagebank.sweden.se

You learn a lot about Sweden

Learning a language is one of the best ways to get under the skin of a country, and most Swedish language courses have a strong emphasis on culture and lifestyle, rather than just verb tables and vocab. My textbook includes facts and stats related to each topic, and a particularly long time was spent in class learning about fish and traditional Swedish drinking songs, of which our teacher gave a hearty rendition.

In other cases, it's only by learning particular words that you can fully understand a certain concept. In what other culture would you have a specific term for passive-aggressive notes left in a laundry room (tvättstugelapp, by the way) or the first day of the year when it's socially acceptable to eat fermented herring (that's surströmmingspremiär in Swedish, or 'never', in my humble opinion)?

You will make embarrassing mistakes

Any language teacher will tell you that the only way to learn is to make mistakes and going by that logic, I have learned a lot of Swedish. In a language where the same word is used for 'six' and 'sex'; the pronunciations of 'drunk' (full) and 'ugly' (ful) sound deceivingly similar but neither means the English 'full'; and the word for cinnamon bun (kanelbulle) can all too easily be mis-pronounced as knullbulle or 'sex bun' (using an offensive word for sex at that), you're going to slip up sooner or later.

Your English (or native language) will become worse

Swedish linguistic quirks can start to infiltrate your mother tongue, so that you end up saying things in an idiosyncratic way ('exact!' instead of 'exactly!') or even forgetting the English word for something.

It can also affect any other languages you've previously learned. I studied German and Italian at university, but these days my German has a Scandinavian twang, and I've confused at least one Italian friend in Stockholm by inviting them for fika (a coffee break) – forgetting that fica in Italian, pronounced the same way, refers to female genitalia. You'll take any opportunity to practise…

The high level of English spoken by most Swedes makes settling into the country relatively easy, but is frustrating when you want to try out your newly-learned vocab.

Just like a bear can detect the smallest signs of weakness, the linguistically gifted Swedes seem able to sniff out any hint of linguistic hesitation, instantly switching to flawless English. And just as with a bear, the best option is often to stand your ground, which in this case means continue obstinately with your Swedish, no matter what. Alternatively, you can play dead so that the bear/Swede loses interest… OK, this simile might be falling apart.

Finding somewhere to practise Swedish is tough outside the classroom, so you might find yourself signing up to an obscure course, or going on a date with someone you have nothing in common with, just for a chance to inflict your dodgy pronunciation on a native. Alternatively, you might find yourself staring intently at an advert on the tunnelbana, trying to decipher the text, before eventually realising it's about STD testing and that your fellow passengers are looking mildly concerned by your apparent interest. … and get excited by the smallest milestones

The difficulty in practising Swedish means you're justified in celebrating each and every language milestone.

The first time you're able to order a meal without the waiter switching to English will be a cause for celebration – at least until they bring you a completely different meal to what you thought you'd ordered. And once you've made it through an entire evening conversing in Swedish, you truly know you've made it.

You develop an attachment to favourite words

Personally I like bonusbarn, which seems to put a more positive spin on 'stepchild', färgglad – 'colourful' but literally translating as 'colour-happy', klumpig (clumsy), and the prefix jätte which I add to everything. But my ultimate favourite is snabel-a, the Swedish term for the '@' symbol which comes from the word snabel, meaning an elephant's trunk. You will learn intimate details about your classmates

Probably the most poignant experience of my Swedish course was the lesson on occupations and the past tense.

Going round the classroom, the teacher asked everyone in turn what they had wanted to be when they were younger. The responses were a window into the childhood dreams of all my classmates, ranging from king to Olympic diver to concert pianist. Then, she asked people what job they did now. Accountant, accountant, accountant, came the first three answers. Very respectable, of course, but slightly less inspiring. Having asked everyone, the teacher merrily concluded: “So! No one does what they wanted to do! Vad synd!“ You will be blunt

Various studies have claimed to show that people's personalities change depending on the language they speak, and in particular, that your native language is more closely connected to strong emotions, because the force of a word isn't diluted by translation.

Combined with the limitations that a beginners' level imposes, this means you just can't get the same range of tone or nuance across, and your Swedish speech might come out more abruptly than intended.

In what other situation would it be appropriate to round on someone you met only ten minutes ago, ask them in quick succession if they're married and have children, and respond to their negative answers with a loud “and why not?” Yet that's exactly what happened to me in a lesson on family relationships. People will ask why you're bothering

Learning Swedish is hard. Heading into a classroom after a day at work in order to get intimately acquainted with Swedish verbs, or spending your Sunday morning slowly, painstakingly, probably incorrectly translating the local paper that arrived on your doormat is not many people's idea of fun. Yet I'm still surprised when Swedes ask me why I'm trying to learn their language, their confusion amplified by the revelation that I work in an anglophone office.

There are plenty of reasons to learn Swedish – and despite all of the above, I'm really glad to be doing so. Yes, you can 'get by' in Stockholm perfectly well without knowing the ins and outs of Swedish sentence structure. But if you want to do more than just 'get by' here; if you want to build a life where you can read menus, speak to a doctor, watch Swedish TV, and avoid being gripped with paranoia every time bilingual colleagues switch to Swedish, you have to learn the language.