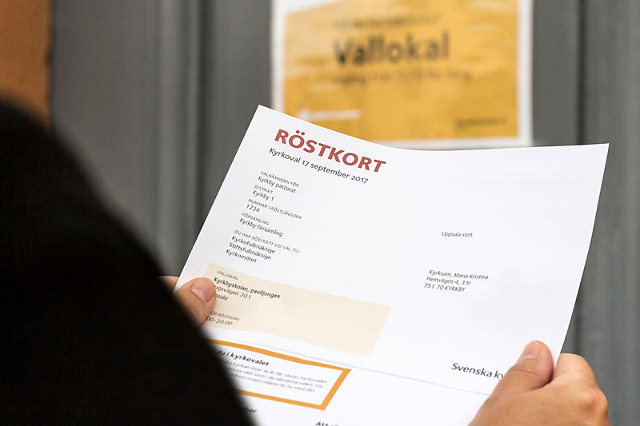 On September 17th, members of the Church of Sweden will head to the polls to cast their vote in this year’s church elections, held every four years, to elect officials to various decision-making bodies within the church. In order to vote, a person must be at least 16 years old and a member of the Church of Sweden.

While the Church of Sweden officially separated from the state in 2000, it retains special status and is regulated by the 1998 Church of Sweden Act, which dictates that the church must be a democratic, Lutheran people’s church.

Members can be elected to the Parochial Assembly at the local level, the Diocesan Council at the regional level, or the General Synod at the national level. Much like a Parliamentary system, these bodies then appoint a board – the Parochial Church Council, the Diocesan Board, and the Central Board of the Church of Sweden respectively.

While the Church of Sweden doesn’t have a political role, per se, political parties can (and do) register nominating groups to put forward candidates to run in church elections.

According to Jan Strid, a specialist in the Church Elections from the University of Gothenburg, the current set up is a consequence of the terms of the 2000 ‘break up’ of church and state in Sweden. As a result, some politicians and political parties are still active in Church of Sweden elections.

This year, there are a total of 15 nominating groups putting forward candidates to run in church elections at various levels, with three of those groups being connected to traditional political parties: the Social Democrats, the Centre Party, and the Sweden Democrats.

The Sweden Democrats have been investing heavily in the 2017 church elections, nominating around 1,000 members compared to only 130 four years ago. The party explains its efforts as an attempt to end the Social Democrats’ control over the church and stop the influence of left-wing ideas.

“I think the Sweden Democrats are doing it for the image – they want to show that they are part of society and that they are everywhere,” says Strid. “They want to be seen as an ordinary party.”

Strid also believes the Sweden Democrats’ push in this year’s church elections is part of a larger strategy to boost their chances in next year’s parliamentary elections.

“If they get a lot of votes, there may be a bandwagon effect for next year’s election,” he adds.

The Social Democrats are well aware of the Sweden Democrats’ plans, says Strid, and are thus campaigning heavily – even Prime Minister Stefan Löfven has called members to come out and vote on September 17th.

However, he believes the church election battle is more about style than substance, as there is “little risk” when it comes to having members of a particular political party on church decision-making bodies and the Sweden Democrat representatives have served on General Synod, the Church of Sweden’s highest decision-making body.

“What have they accomplished? Nothing,” Strid points out. “So it’s more a fear that they will show they are very big. But that’s political, not related to the church.”

Nevertheless, it appears church elections are generating more interest than in the past. A recent report by Sveriges Radio revealed that in the month of August, 900 people joined the church as new members, in time to vote in the election.

This is the highest number of new members for the month of August in fourteen years. But this doesn’t necessarily mean that turnout will be higher overall, as the same report showed that 6,600 people also left the Church of Sweden in August.

While the Church of Sweden has over five million members overall, only a small percentage actually participate in the elections. In the 2013 church elections, only 12.8 percent voted – but Strid reckons that active campaigning by political parties might bring more people to the polls.

“I think the participation will increase. Let’s say by two percent or so,” he projects.