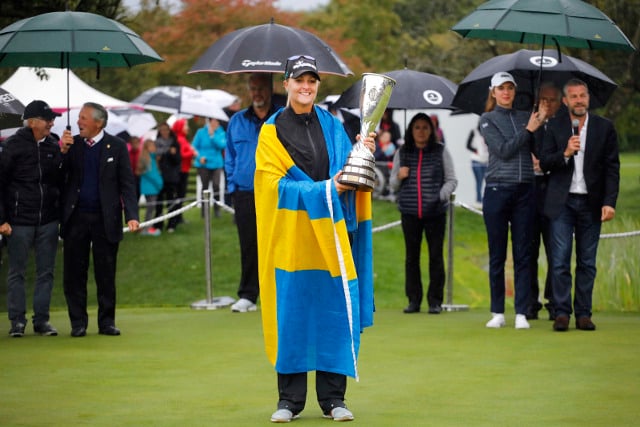 Both players shot 66 to tie on nine under par, and a bogey five at the first play-off hole – the 18th – was good enough for the 30-year-old to add another major to the 2009 LPGA Championship.

For the past two and a half months, Nordqvist has been suffering from glandular fever, but she leant on the words of her late grandfather, who said to “never give up”.

She first showed her resilience with a virtuoso display in Europe's Solheim Cup defeat by the US last month, top-scoring with 3.5 points.

A brilliant final round that included two eagles and four birdies helped Nordqvist storm to the title on Sunday.

“That's what he always told me and that's what I try to do,” she said.

“It has been a tough few months. I always wanted to make the Solheim Cup and I did that. But I have been exhausted. I don't enjoy lying in bed and not being able to do anything.

“Because of the illness, it definitely makes this win sweeter.”

With rain and then hail lashing the course, the play-off was staged in horrendous conditions and the 18th green had to be squeegeed before the players could putt.

Last year, she lost in a play-off at the US Women's Open when she was penalised two shots for brushing sand in a bunker with her club.

“The play-off hole was so hard and the weather was about the worst I have ever played in. My hands were numb for the last couple of shots.

“But I grew up in Sweden so I am used to playing in pretty bad weather.”

The Championship was reduced to 54 holes after Thursday's play was wiped out by severe storms and the last day was a real ding-dong affair.