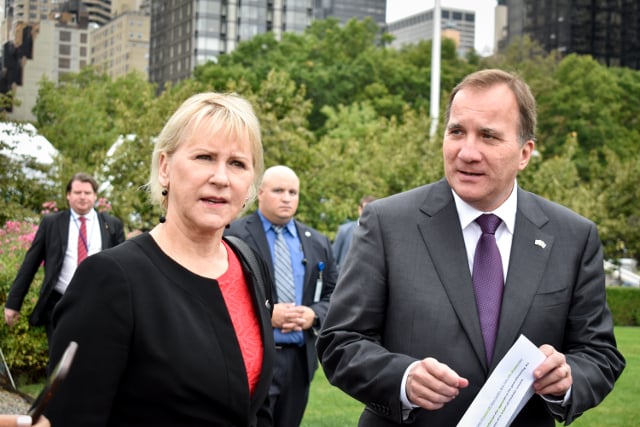 Löfven is currently in New York for the annual opening of the United Nations General Assembly. Sweden is a non-permanent member of the UN Security Council for the 2017-2018 term.

On Tuesday evening he is set to attend a reception hosted by the US President and First Lady. It is the first time Löfven will come face to face with Trump since the US election, and the first time since the latter attacked Sweden over its crime and immigration policies in his infamous “Last Night in Sweden” speech.

“It will be a very short meeting,” Löfven told the Expressen tabloid.

“We will shake hands, say hi and I will highlight the importance of us having a good relationship with the US, because that's the case no matter the country's administration.”

“If I have time I will also say something about North Korea and the importance of resolving the conflict peacefully,” he added.

Sweden has a uniquely long-standing diplomatic relationship with North Korea dating back to the 1970s, with Sweden the first Western country to open an embassy in the country. It also serves an important role for the US in North Korea, working as a Protecting Power for America in the country, which includes providing consular responsibility for US citizens. It performs the same role for Canada and Australia.

“We are not naïve – a dialogue and a solution between the US, China, Russia and the big players is necessary. But if it is the case that our long-standing presence has built a certain level of trust that means we can contribute to the process, we want to do that,” Löfven told Expressen.

“It could involve maintaining a dialogue, making sure that it works, or assisting with information and contacts. It is a fact that we enjoy fairly strong trust as a non-aligned state, we serve no one else but we only serve in the interest of peace. Sweden has a strong reputation and it is important,” he added.

The Social Democrat leader has spoken to Trump on the phone before, three weeks after the latter took office, but this is the first time they will meet in person.

The US President has provoked anger several times in Sweden and other European countries, not least with his “last night in Sweden” comments which prompted several Swedes to hit back, with Prime Minister Löfven and even King Carl XVI Gustaf himself emphasizing the importance of fact-checking.

In fairness, it is not just Trump who has engaged in a bit of Sweden bashing.

Sweden has hit back in kind, for example when climate minister and deputy prime minister Isabella Lövin went viral with a picture of her signing the proposal for Sweden's new climate law with her female colleagues, parodying Trump's signing off on an abortion order while surrounded only by men.

And let's not forget the viral Trump handshake animation and Trump Donald Trump website which both originated in Sweden.