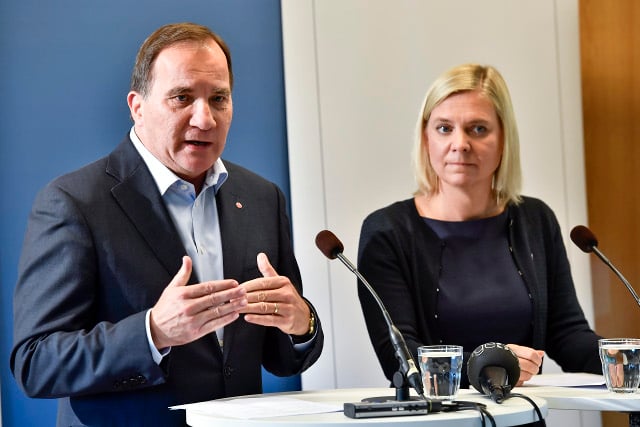 The state of Sweden's healthcare has been a hot topic in the country this year thanks to problems in maternity care and a high profile closure of a maternity ward in northern Sweden. It led to a sit-in protest in the aforementioned ward, as well as a subsequent series of demonstrations across the country in August.

The Left Party, who are part of the agreement to get the budget passed with the minority Green-Social Democrat government, has taken credit for negotiating a 4.7 billion kronor ($592 million) injection to healthcare spending in the forthcoming budget for 2018, plus a one billion kronor per year boost to maternity units from 2018-2022.

“People giving birth should feel assured they will get the care they needed, but that's not always the case today. That's why we’re very happy to have got as big a boost as one billion kronor per year through from next year,” Left Party leader Jonas Sjöstedt said in a statement.

Mental health care will get 600 million kronor more in 2018 meanwhile, and fees for Pap smear tests for cervical cancer will also be abolished.

One of the flagship sections of the budget is the government's “all of Sweden” strategy, which in many ways is geared to help rural Sweden (and by extension, an effort to win support in those areas ahead of the September 2018 election).

Some specific examples include 253 million kronor to create “green jobs” across the country in 2018, shared between the Swedish Forest Agency, Transport Administration, Environmental Protection Agency and Geological Survey of Sweden, many of which will be in rural areas.

410 million kronor will also go to entrepreneurship and training, including investing in regional export centres so businesses outside of the big cities can bring in more international customers. A further 253 million kronor will go to infrastructure, improving roads and public transport networks in rural areas.

The budget is good news for students in Sweden who will have their study grant increased by 300 kronor per month from autumn 2018.

Schools meanwhile will get a 1.5 billion kronor funding boost in 2018, to be shared out according to the socioeconomic situation of the municipality where the school is based in an effort to try to close gaps in society.

300 million kronor in 2018 will fund free swimming lessons for children meanwhile, with the government noting that it is common for kids from difficult socioeconomic backgrounds to struggle with swimming.

Unsurprisingly considering the Green Party are part of Sweden's coalition government, the budget also includes measures to help the environment, with five billion kronor directed to battling climate change through transport and energy measures. The Green Party calls that “the biggest investment in the climate and the environment in history”.

600 million kronor will go to cleaning up the ocean, will money will also go to solar energy and increasing the number of charging stations for electric vehicles.

“Our generation should be able to hand over a society to our children where the biggest environmental problems are solved and cities should be living and healthy environments to grow up in,” deputy PM and Green Party joint spokesperson Isabella Lövin said in a statement.

A controversial new tax on airline tickets designed to encourage consumers to choose other methods of transport will also be included – despite it being highly unpopular among opposition parties.

READ ALSO: What you need to know about Sweden's new airline tax

Along with healthcare, Sweden's policing is another area where there have been stories of problems in recent years, including dwindling numbers of officers and unions complaining that the country’s crime clearance rate is going in the wrong direction as a result.

The police will receive a two billion kronor injection in 2018 to try and help turn things around, with funds directed towards improving working conditions and encouraging people to stay in the force, as well as employing more officers.

Government money will also strengthen the judiciary and national security, with 750 million kronor given to agencies like security police Säpo and the prosecution authority to help strengthen their work.