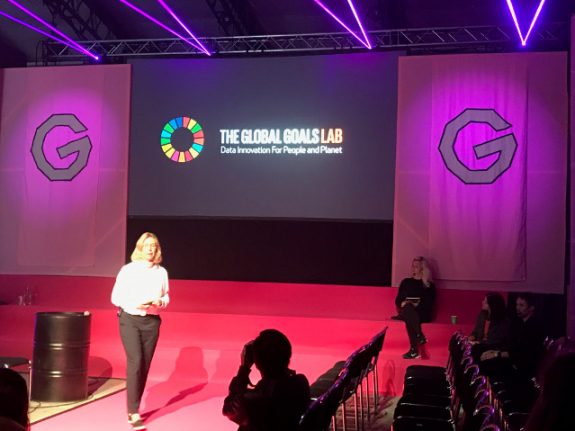 On September 14th-16th, I was lucky enough to attend the Gather Festival 2017 at Nobelberget in Stockholm, which was once an industrial warehouse but is now is a place for conferences and activities.

In the special Swedish sustainable atmosphere, we experienced an impressive festival and heard many innovative and interesting ideas. The Gather Festival consists mainly of three parts: a conference; labs; and a music festival. Speakers from all over the world shared their ideas at the conference and continued to further discussion following their speeches.

The conference also focused on five themes: Human and Machine; Democracy; Economics; Urban development; and Communication. In the Lab, attendees could discuss topics openly and try to find solutions. And the Night Music Festival provided us with a happy and relaxed musical experience.

‘Big data’ in the future

I attended three sessions on the theme “Algorithm Business” as well as a speech about using data in urban development. The speakers tried to describe a totally different data world in the future.

First of all, the security of the internet is the foundation of our data world. If we cannot protect our data, we can’t create and protect this new world based on data. Claudia Olsson, CEO and Founder of global digital consultancy Exponential, introduced a technology – blockchain – to solve the current security problem. From this safe foundation, Claudia explained, we can develop next-generation technology. Tuva Palm, CTO of innovative financial institution Nordnet, gave a speech about artificial intelligence (AI) finance or a personal bank advisor. It’s hard to say that machines will totally replace humans in finance, however machines have lots of advantages and perform many tasks better than human.

Using the huge amounts of data we generate every day, machines can provide a precise prediction and analysis for each customer and give them proper advice based on their own situation. This is not sci-fi, but what is happening now. Maybe one day we will not have to spend a lot of time analyzing the situation and getting advice from other humans, but will instead get advice directly from machines within seconds.

Urban design is another interesting application for ‘big data’. Maja Briswall, co-founder of sustainable data consultancy The Quantified Planet, showed us the increasingly serious problems of our planet, such as air, water, and climate problems. Fortunately, in the data world, we can create a more effective tool to solve these problems. She offered us a prototype of the future city, where we can collect data, monitor the state of the city, analyze it, and uncover problems related to our development.

If you are in Sweden, you will likely have the chance to attend to a discussion about gender equality. The team from Making Waves, a design agency with offices in Scandinavia and the US, gave a speech about the role of females in product design. They pointed out that the current product design process should consider females more.

For example, according to their research, cars are designed to protect the male rather than the female in a car crash. They claimed that if we thought more about female customers, we could attract a huge number of potential customers in the world, which will not only benefit the customers, but also increase revenue for the company. Another discussion following one of the interesting speeches about nightlife focused on females in the music industry. After several women shared their experiences with inequality, people attending the discussion offered their opinions about how to solve gender equality problems.

Other women gave examples describing how they fight for their own rights, prompting some men attending the session to add that they appreciated that the women discussed their problems and that they now better understood the situation.

In the discussion, several fathers shared their own attempts to promote gender equality. The group concluded that we still have lots to do to improve gender equality and that we also need to do more to allow women to feel confident about themselves when they are young and give them more support to learn and work. If the world takes more time to discuss gender equality, we will hopefully be able to finally solve the problem.

Attending the Gather Festival with the support of Swedish Institute allowed me to have an impressive and inspiring journey, and experience many creative ideas and interesting projects. The Festival broadened my horizons as well as encouraged me to study harder so I can contribute to creating a more attractive world in the future.