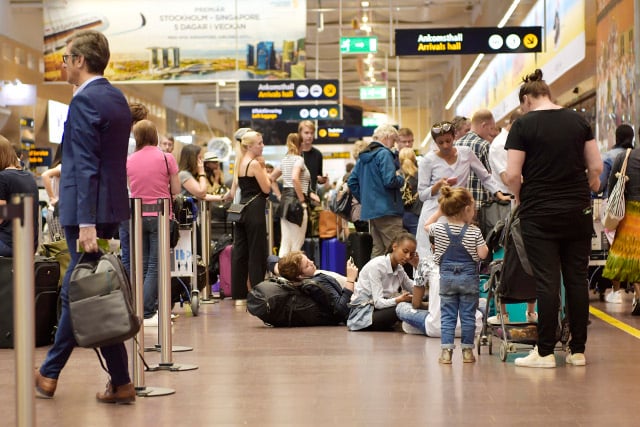 The MoveHub report collated data from the World Bank and World Tourism Organization from between 2007 and 2016 to determine which countries make the greatest number of annual tourist trips per citizen, and it turns out the Swedes are pretty keen on travelling.

With an average of 1.5 trips abroad per citizen, Swedes took the fourth most in the world, behind Hungary (1.62), Luxembourg (2.56) and Hong Kong (11.4). Hong Kong's unusually high number was also influenced by a unique factor.

“The research counted trips to mainland China,” Patrick Gilligan from MoveHub explained to The Local.

His reasoning for Swedes travelling so much is the country's annual leave allocation, which permits a minimum of 25 days per year. On top of that are several so-called 'red days', paid public holidays. READ ALSO: How to make the most of Sweden's public holidays in 2017

Sweden's neighbours Finland were the fifth best-travelled with 1.46 trips per citizen, while the Danes came ninth with 1.4. Intriguingly, the report suggests Norwegians travel abroad significantly less than their Scandinavian counterparts, with 0.64 trips on average.

Brits take an average of 0.9 trips – 21st on the list – while Americans only take 0.2, placing them among the least internationally travelled. The majority of Americans do not own passports, and a lack of statutory minimum annual leave is also likely to be an influencing factor.

The study also looked at how much Swedes spent on international holidays each year, and the average of $1,452 per person made them the 10th biggest spenders. Despite taking a lower amount of trips abroad, Norwegians still spent more however ($1,725).

People from Luxembourg spent by far the most with a whopping $5,767 per year, while Icelanders were the biggest spenders from the Nordics with $2,985.

PARTNER CONTENT
Winter escapes: treat yourself with a trip to the ‘Venice of the north’
Url copied to clipboard!