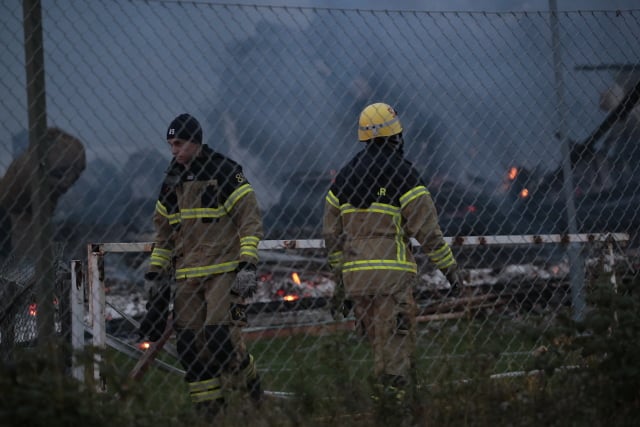 Firefighters at the mosque in Vivalla, Örebro. Photo: Kicki Nilsson/TT

Firefighters were called to the mosque in the Vivalla area of Örebro shortly after 2am on Tuesday. Five hours later they were still battling the flames, which threatened to consume large parts of the building.

One part of the building is described as completely destroyed, and the roof has caved in. In another part there are smoke and water damages, while a third part appears to have escaped the worst of the fire.

“We're still having problems in the middle part,” said Jacobsen.

There are no reports of injuries. The fire broke out in the early hours of Tuesday. Photo: Kicki Nilsson/TT

According to initial calls to emergency services cars were on fire. However, when firefighters arrived the fire was fully developed.

“We have not seen a car. But then we pretty quickly got several calls. We understood then that it was a major fire,” said Jacobsen.

At a press conference just before lunchtime on Tuesday police confirmed that one person had been arrested suspected of arson, and noted they “see no political or religious motive for the crime”.

Örebro Mosque moved to the building, which was previously used by Jehovah's Witnesses, in 2007. It welcomes more than 5,000 visitors a month of around 25 different nationalities, according to its website.

The Sunni mosque was attacked in 2014, when someone threw a bottle with flammable contents through a window. However, a fire did not break out as a result.

Vivalla is one of 23 areas in Sweden considered “especially vulnerable” in a police report from 2017.

According to the police's definition, an “especially vulnerable area” is “characterized by social issues and a criminal presence which has led to a widespread disinclination to participate in the judicial process and difficulties for the police to fulfil their mission. The situation is considered acute”.