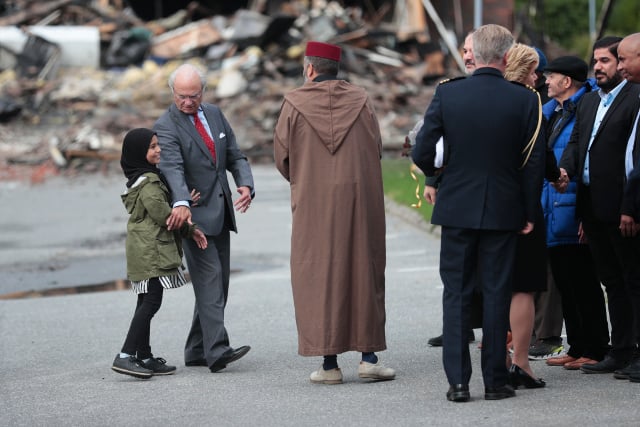 King Carl XVI with the daughter of the CEO of Örebro mosque. Photo: Pavel Koubek/TT

The mosque in the Vivalla area of Örebro in central Sweden was almost completely gutted in a blaze in the early hours of Tuesday. A 20-year-old man has been held on suspicion of starting the fire.

The King was in Örebro on Wednesday, for a previously scheduled visit to the university to attend a lecture about microplastics, and paid a visit to the mosque afterwards on his own request.

“It is an honour to us that the King was able to give us some of his time, because he was in Örebro. And that he was able to share this grief with us and see what has happened,” Örebro Mosque deputy CEO Hassan Mountagui told broadcaster SVT.

“The King seemed quite kind,” Jasmine, the daughter of the mosque's CEO Jamal Lamhamdi, told Expressen. She had brought flowers to give to the King. Spectators hoping to catch a glimpse of the Swedish royal. Photo: Pavel Koubek/TT

The Swedish Church has also expressed its condolences. On Tuesday some of its representatives visited the scene of the fire to offer coffee and words of comfort to mosque-goers.

“I want to be there and show our support. If there is anything the Swedish Church can do to help we want to,” local priest Graham Jarvis told the Nerikes Allehanda newspaper.

One man, aged 20, has been arrested suspected of arson. Örebro police have noted they “see no political or religious motive for the crime”, but are continuing the investigation. Örebro Mosque moved to the burned-down building in 2007. The Sunni mosque welcomes more than 5,000 visitors a month of around 25 nationalities, according to its website.

There had been no recent threats made against the mosque, which was attacked once before in 2014 when someone threw a bottle with flammable contents through a window.

Vivalla is one of 23 areas in Sweden considered “especially vulnerable” in a police report from 2017.

According to the police's definition, an “especially vulnerable area” is “characterized by social issues and a criminal presence which has led to a widespread disinclination to participate in the judicial process and difficulties for the police to fulfil their mission. The situation is considered acute”.