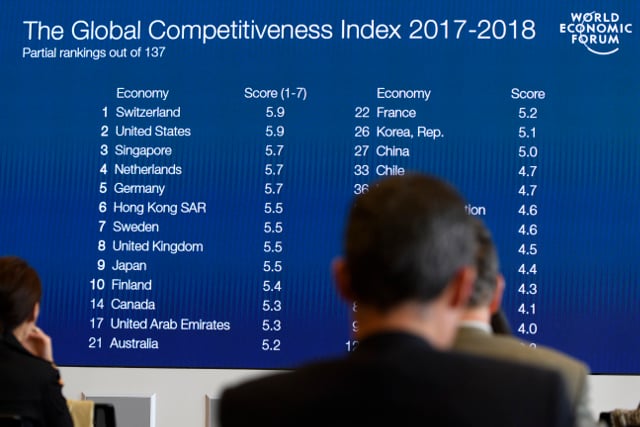 In the latest edition of the Global Competitiveness Index Sweden is also the highest-performing of the Nordics, placing ahead of Finland (10th), Norway (11th), Denmark (12th) and Iceland (28th). It did however slip one spot compared to 2016, as Hong Kong leapfrogged Sweden into sixth.

“Sweden has been among the top 10 of the overall ranking for several years. While it drops by one spot this year, its overall score remains stable – meaning its absolute level of competitiveness is unchanged from last year,” WEF economist Silja Baller told The Local.

Sweden’s reputation in the tech world was reflected in the index, as it received top 10 marks in the “technological readiness”, “business sophistication” and “innovation capacity” categories.

“The report considers a wide range of factors that are important for the wider innovation ecosystem: firms' capacity for innovation, the quality of scientific research institutions, government procurement of advanced technologies and availability of scientists and engineers,” Baller explained.

“Among those, Swedish business executives rate Swedish firms' capacity for innovation especially highly, and the economy registers the second highest number of patents per capita. Furthermore, levels of technology adoption among the population and firms is high, which is an important complement to innovation efforts – Sweden ranks fifth globally on technological readiness,” the economist continued.

In the future global competitiveness will be “more and more defined by the innovative capacity of a country” due to the impending Fourth Industrial Revolution, the WEF argued in its presentation of the report.

A further positive for Sweden was an improvement in the macroeconomic environment indicator by one position from fifth to fourth, thanks to the government deficit reducing compared to 2016, and the government debt burden falling by 2.5 percent between 2015 and 2016. A map showing the performance of some of the countries in the study. Photo: WEF

It wasn’t all good news however. Among the factors most commonly rated as “problematic” for doing business in Sweden are restrictive labour regulations, inefficient government bureaucracy and tax rates.

“Business executives’ perceptions of public and private institutions have fallen this year. For public institutions the drop is seven places, which includes factors such as property rights, ethics and corruption, undue influence, public sector performance and security. In terms of private institutions, which includes indicators on corporate ethics and private sector accountability, Sweden drops by two places from third to fifth,” Baller pointed out.

The Global Competitiveness Index is an annual assessment of the driving factors behind the productivity and prosperity of countries. It uses statistical data from the International Monetary Fund (IMF), the World Health Organization (WHO) and the UN Educational, Scientific and Cultural Organization, as well as information from the WEF's annual Executive Opinion Survey.

The highest ranking economy in the 2017 edition is Switzerland, followed by the US then Singapore.