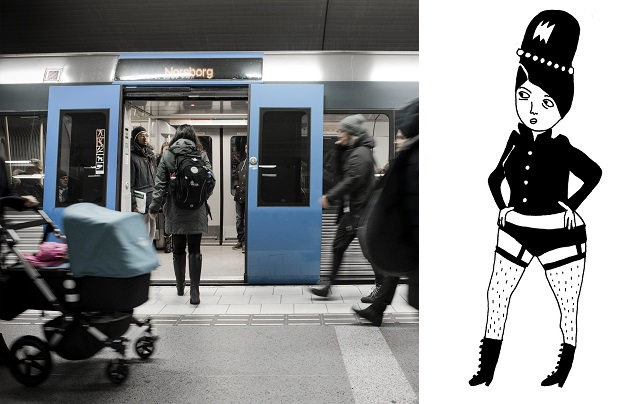 Stockholm's subway (photo: TT) and one of the artworks by Liv Strömquist, at Slussen station

The works by artist Liv Strömquist have gone on display at the Slussen station in the south of the Swedish capital.

Her black and white images depict birds, cats, and trees, as well as nude men, and women who are shown both with unshaven legs and ice skating while menstruating. The red patches are the only spots of colour in the paintings.

“The artist's choice pays tribute to the human body in all its forms and expressions,” Martina Viklund, a press spokesperson for Stockholm transport company SL, told The Local.

She said that the artists and works exhibited in the city's subway stations were chosen by SL's Art Council, which is made up of SL workers, art consultants, and artists, and that one of the factors in selecting Strömquist's work was a desire to promote art which appealed to a younger audience.

“It is essential that the content is not perceived as offensive, but SL has no policy regarding showing naked human bodies in the subway – art has a long tradition of celebrating the naked human body,” Viklund said. Strömquist regularly publishes satirical comics, often touching on feminist issues and her book 'Kunskapens frukt' ('The Fruit of Knowledge') about menstruation as a taboo has been translated into Danish, Finnish, and German.

Slussen is one of four stations to get updated artworks, the others being Fridhemsplan on the green line and Gärdet and Zinkensdamm on the red line.