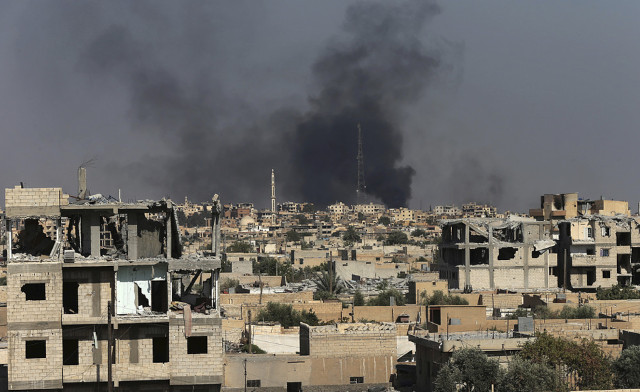 An attack against Isis in al-Raqqa, Syria. Photo: Hussein Malla/AP/TT

It was feared that more Swedish citizens who went to join the terrorist organization would return to the Nordic country after Isis was pushed back in Syria and Iraq earlier this year. Instead the trend from 2016 has continued and the number is declining.

Swedish news agency TT spoke with local coordinators against violent extremism and police in the Swedish cities where the problem had previously been significant, and all painted a picture of a sharp decline in 2017.

“As far as I know there hasn't been anyone returning this year,” Fredrik Malm, who works against radicalization in Örebro, one of the municipalities where people travelling to Isis had been a problem.

Other cities like Malmö, Gothenburg, Borås and Stockholm have reported “isolated” instances of people returning. While the reasons vary, one explanation for the trend could be that it is now very difficult to get both in and out of Isis-controlled areas, according to Sweden’s security police Säpo.

“We have a number of people (Swedish citizens) who are still in the warzone near Turkey that can't move onwards, mainly women and children,” Säpo’s security head in Borås Peder Englund told TT.

According to Säpo estimates, around 300 people travelled from Sweden to Iraq and Syria in order to join militant groups between 2012 and 2016.

A terror expert warned however that the threat should not be dismissed.

“It's not about the number but about who is returning,” Magnus Ranstorp from the Swedish Defence University told TT.

“They don't have to be many. We have had – which we often forget in Sweden – two people who returned to Sweden and participated in the Paris and Brussel attacks, two of the worst terror attacks in Europe.”

In Stockholm, the people who have returned recently have kept a low profile, according to Christoffer Bohman, who is deputy area head for the police in the Järva suburb.

“Their presence in the area has been very low key.”

“Local police in the area have no information from the last half a year that shows any form of terror planning or planning of an attack. Rather, it’s everyday crime these individuals pursue,” he added.