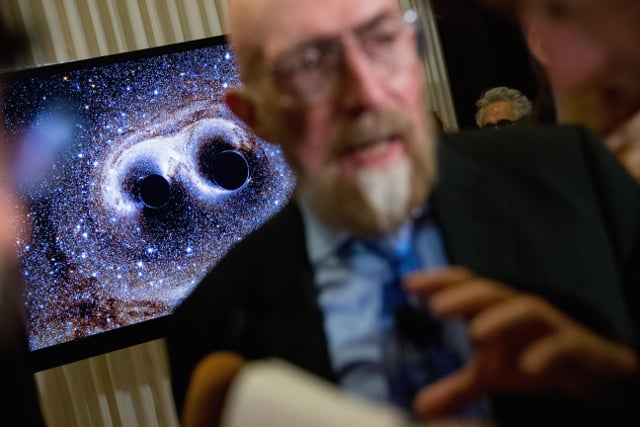 Rainer Weiss, Barry C. Barish and Kip S. Thorne took the prize for “decisive contributions to the LIGO detector and the observation of gravitational waves”.

It's also incredibly complicated, so to help us gain a better understanding, The Local spoke to Lars Brink, a member of Royal Swedish Academy of Sciences department of physics and professor of theoretical particle physics.

Gravitational waves were first theorized about 100 years ago, but we have only now detected them. Is that proof that science is in many ways about perseverance, and approaching the same question with different methods?

That's correct. When Einstein first realized there were these waves, he also realized it would be impossible at that time to measure them. It's such a weak signal he could not even contemplate a way of measuring it. But then, some 50 years ago, people took it up again and realized there might now be ways of doing it. Then, as you say, it's really perseverance. It has taken 40, 50 years.

What is nice is that these three people complement each other, because when Barry Barish came in, he was the one who understood the kind of scale needed, the equipment needed. There are so many parts of the equipment, not just laser beams, you also have mirrors, and above all you have to minimize the noise, since it's such a weak signal. They have been improving this apparatus year after year. They closed it for a few years, opened it with better resolution, so on, so forth. There has been a lot of real perseverance, it's very impressive in that sense. This is how big science works – it takes many years to do, with many people involved. This shows what humankind can do if we really unite and work towards a common goal and get people to be enthusiastic over so many years.

“A truly remarkable achievement” – Nobel Committee Chairman Nils Mårtensson on the discoveries made by this years' Physics Laureates. pic.twitter.com/YehKLvGBkN

In the presentation of the prize the LIGO detector was labelled as possibly the most sensitive device ever created. There is obviously an immense amount of skill involved in creating the device, but there must be in operating it too?

All of these parts are difficult, and you have to have extreme precision, be careful in everything you do. Just someone shutting a door for example would disturb the system. Fortunately, you can have it in places in the US, that are rather isolated. It's good that there are places where you can really keep it away from disturbances. I think it's a great example of how a common goal can be achieved when all the details are worked on – every little detail – correctly. That's what they were able to do.

Rainer Weiss in his lab @MIT's Building 20 in the late 1970s, working on a
cryogenically-cooled detector for Cosmic Microwave Background pic.twitter.com/ze7zsHYbge

Professor Weiss said in his phone call from the panel that he hopes to one day create even more sensitive devices and maybe even look at the beginnings of the universe. Is it possible? That sounds like fantasy, but I imagine that 100 years ago we thought even measuring these waves was impossible.

I'm not sure. You always have dreams of course. This is an intermediate step. They've established this is working, and now we have to go on. Of course we're very fascinated about the beginning of the universe. It's fundamental in physics, as a consequence of Einstein's theory but also further back in quantum gravity theory. Einstein did two great things – gravity theory and quantum mechanics. One very big issue in fundamental physics is merging those two things, we're working on that and have models. But of course, it's very difficult to test these things because you would have to be able to measure very early times in the universe. If we can do that one day, then we would be able to also get proof about our ideas on the beginning of the earth. Einstein has been mentioned a lot today – the panel at the 2017 Nobel Physics Prize presentation pointed out that he has been proven right again. Was he human? It seems incredible that we are a century later still discovering that things he theorized are right.

Then you may say his last 30 years or so were not very productive, he wasn't happy with developments, and in that sense he was proven wrong in many ways, in those debates with Niels Bohr which are very famous, Bohr proved him wrong several times. But he was of course a remarkable person.

On 14 Sept. 2015, the universe's gravitational waves, predicted by Albert Einstein 100 years ago, were observed for the first time. pic.twitter.com/oWWj8SE1b9