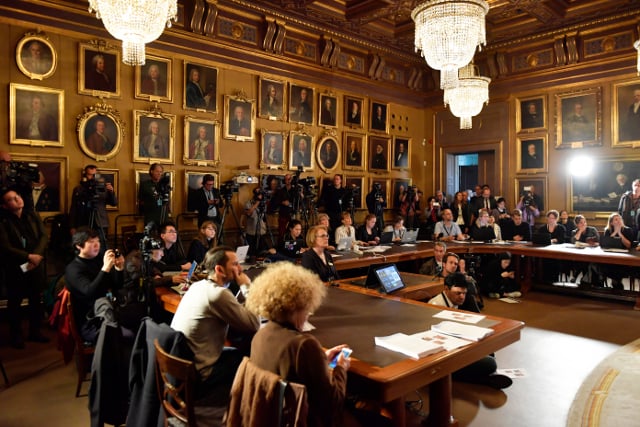 Rainer Weiss, Barry C. Barish and Kip S. Thorne took the prize for “decisive contributions to the LIGO detector and the observation of gravitational waves”.

It's also incredibly complicated, so to help us gain a better understanding, The Local spoke to Lars Brink, a member of Royal Swedish Academy of Sciences department of physics and professor of theoretical particle physics. Here's what he had to say.

READ ALSO: A long time ago in a galaxy far far away – the Nobel Physics Prize explained

That's it for today. Follow us again tomorrow, when we will delve deep into the world of chemistry. The 2017 Nobel Prize in Chemistry is set to be announced at 11.45am.

We're waiting to speak to an expert at the Royal Swedish Academy of Sciences about the exciting research that led to this year's award. We'll update this blog as soon as we have it.

And the presentation is over. No questions for the panel – probably because everyone needs to cram before individual interviews pic.twitter.com/jJ1jrMeEX5

Here's more of what the Nobel Committee had to say in their press material explaining their research:

“Gravitational waves spread at the speed of light, filling the universe, as Albert Einstein described in his general theory of relativity. They are always created when a mass accelerates, like when an ice-skater pirouettes or a pair of black holes rotate around each other. Einstein was convinced it would never be possible to measure them. The LIGO project’s achievement was using a pair of gigantic laser interferometers to measure a change thousands of times smaller than an atomic nucleus, as the gravitational wave passed the Earth.”

“So far all sorts of electromagnetic radiation and particles, such as cosmic rays or neutrinos, have been used to explore the universe. However, gravitational waves are direct testimony to disruptions in spacetime itself. This is something completely new and different, opening up unseen worlds. A wealth of discoveries awaits those who succeed in capturing the waves and interpreting their message.” Göran K Hansson, the Secretary-General of the Royal Swedish Academy of Sciences, is now talking to one of the winners, Berlin-born Rainer Weiss, on the phone. I understand he is based at the Massachusetts Institute of Technology in the US, so with a six-hour time difference that phone call from Stockholm woke him up this morning. He is quite humble about the win, emphasizing that more than 1,000 people are involved in the research at LIGO, so he views “this as something that recognizes the work of about 1,000 people”.

2017 Nobel Physics Prize winner Rainer Weiss is now on the phone. “This is Göran Hansson, the guy who woke you up”. #NobelPrize

“I view this a something that recognizes the work of about 1,000 people,” Rainer Weiss says. #NobelPrize

12:13 'Revolution in our knowledge of the universe'

Let's look at what the Nobel Foundation has to say about the laureates.

“The 2017 Nobel Laureates have, with their enthusiasm and determination, each been invaluable to the success of LIGO. Pioneers Rainer Weiss and Kip S. Thorne, together with Barry C. Barish, the scientist and leader who brought the project to completion, ensured that four decades of effort led to gravitational waves finally being observed.”

“In the mid-1970s, Rainer Weiss had already analyzed possible sources of background noise that would disturb measurements, and had also designed a detector, a laser-based interferometer, which would overcome this noise. Early on, both Kip Thorne and Rainer Weiss were firmly convinced that gravitational waves could be detected and bring about a revolution in our knowledge of the universe.”

12:10 A discovery that shook the world

This year's Nobel Prize research is about “a discovery that shook the world”, Göran K Hansson, the Secretary-General of the Royal Swedish Academy of Sciences, explained in his announcement  earlier (which he impressively made in four languages: English, Swedish, German and French).

The universe's gravitational waves were predicted by Albert Einstein a hundred years ago, but were only observed for the first time on September 14th 2015 by the LIGO detector in the US. LIGO, the Laser Interferometer Gravitational-Wave Observatory in the US is a collaborative project involving researchers from more than 20 countries, and this year's winners are some of them.

By the way, those waves came from a collision between two black holes and they reached the LIGO detector after having travelled 1.3 billion years through space. Almost makes you feel a bit stressed.

Prize for 'decisive contributions to LIGO detector of gravitational waves, predicted 100 years ago by Einstein but until now undetected' pic.twitter.com/Y5UijpG4pV

The LIGO detector is 'perhaps the most sensitive instrument ever made by man' Olga Botner, Nobel Committee for Physics member explains pic.twitter.com/27sEVo5rm1

Rainer Weiss wins one half, with the other half jointly to Barry C Barish and Kip S Thorne “for decisive contributions to the LIGO detector and the observation of gravitational waves”.

When I said they're usually on time, today we have been told they will be five minutes late. Hang in there!

If you want to, you can watch the Nobel Prize Foundation's live video here:

The Local Sweden's deputy editor Lee Roden is reporting live from the press conference. That is, he will be, soon, once it starts. The room at the Royal Swedish Academy of Sciences is quickly filling up with Swedish and international journalists waiting for the Nobel Committee to take the stage and announce the winner.

The announcement is scheduled for 11.45am, and they are usually on time.

On other hand, is it OK to mic-drop to illustrate gravity at a Nobel Physics Prize announcement? #ScienceKnowledge https://t.co/F4IEHfHHO1

Apparently I'm not the first person to wonder this. I'll take that as a yes, yes it's OK to mic-drop at the Nobel Physics Prize announcement pic.twitter.com/LCWvOqYwjT

Grand venue for a grand prize. The portrait-lined walls of the Session Hall at the Royal Swedish Academy of Sciences. #NobelPrize pic.twitter.com/ARYR4Ychc6

“Let's do a snapchat,” I just heard someone say. Science isn't what it used to be. #NobelPrize

The average Nobel winner is a 55-year-old male. A total of 110 Physics prizes have been handed out to date, and of those only two of the winners were women. Apparently if your name is John Bardeen, that also increases your chances. The US superconductivity scientist is the only one who has been awarded the prize twice (in 1956 and 1972). Lawrence Bragg was the youngest. He won it at the age of 25. Talk about life goals achieved.

Did you hear oxygen and magnesium got together?

The announcement is held at the Royal Academy of Sciences in Stockholm, who decides who the lucky scientist of the year will be. The winner gets told only minutes before the rest of us finds out, so depending on where in the world they live, it could make for a very surprising early-morning wake-up call.

According to one of Newton's slightly less famous Laws of Physics, the day after the announcement of the Nobel Prize in Physiology or Medicine, the winner of the Nobel Prize in Physics will be revealed. So here we are again, with The Local Sweden's editor Emma Löfgren live blogging today's announcement, while our deputy editor Lee Roden heads to the Royal Swedish Academy of Sciences for the press conference.

Tweet us your best Physics jokes, and don't hold back, because there's an hour-and-a-half to go before anything actually happens, so we'll need something to keep us awake.