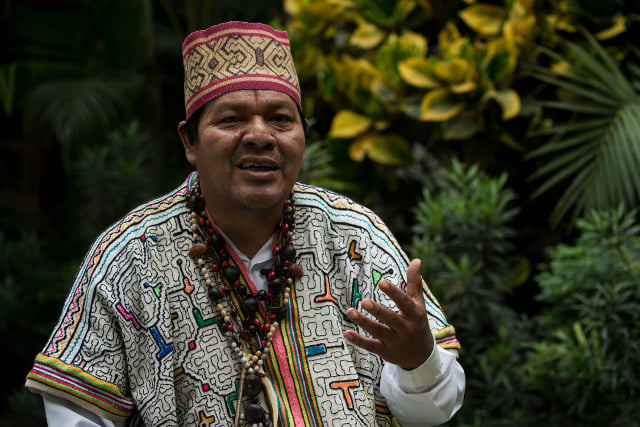 UN officials, international development experts gathered in Stockholm on October 3rd to address what many consider a major contributor to climate change and conflicts in many parts of the world.

“We have gathered here today to discuss and to explore more new ways for working together to support indigenous people and local communities in their fight, in their work to strengthen their livelihoods and their lives today and into the future,” said Carin Jämtin, Director-General of Sida, the Swedish International Development Cooperation Agency

Among other things, the event marked the official launch of the Tenure Facility, the first and only international organisation which focuses on land and forest rights for indigenous peoples and local communities, and which is based right here in Sweden.

Securing land and forests rights for local and indigenous communities is vital to reducing poverty in these communities, mitigate conflict between them, and also ensures food security and climate change mitigation, as indigenous populations manage and protect the forest areas in which they live, the organizers explained. Figures show that deforestation is two to three times lower in areas where indigenous peoples have land rights.

Land rights of indigenous peoples is seen a driver of sustainable economic development in regions that need it most. The Tenure Facility has recently completed pilot programmes in six different countries: Indonesia, Panama, Liberia, Peru, Mali, and Cameroon.

“The results have been encouraging and positive”, said Jämtin.

The event was hosted by Sida in its headquarters in Stockholm. The Tenure Facility is also funded by the Ford Foundation, the Climate and Land Use Alliance (CLUA) and Acacia. The Norwegian International Climate and Forests Initiative (NICFI), administered by the Norwegian Agency for Development Cooperation (Norad), also supports the institution.

At the launch, Jämtin was joined by several other high-ranking officials, including Ulrika Modéer, State Secretary to the Minister for International Development Cooperation, Sweden; Darren Walker, President of the Ford Foundation; and Andy White, Coordinator of the Rights and Resources Initiative.

State Secretary Modéer reminded the audience of the long-standing problems faced, and welcomed the new venture:

“My personal engagement in international development cooperation started with an interest in indigenous communities’ rights in the Amazon, in Peru. So I have been following this topic for a long time, and it’s very encouraging to see today this first Facility that will bring a lot of good examples of how to see the solutions in a world where we see so many problems.”

The Tenure Facility has been in operation since 2014, carrying out six strategically chosen pilot projects in Africa, Asia, and Latin America to test and refine its approach. However, as of the October 3rd event, the Tenure Facility is now officially an independent non-profit foundation registered in Stockholm, Sweden.

Walker of the Ford Foundation also emphasized the importance of the initiative.

“The pursuit of justice in the world is manifest through projects like this, that make us hopeful for a time when we desperately need hope”, he said. “The work of this Tenure Facility could not be more important.”

Walker also thanked the Swedish government for its leadership “in making this historic day possible.”

Modéer added that Swedish development cooperation “draws on these new international commitments” that come with the UN’s Agenda 2030 and the Paris Agreement.

“Good governance and land tenure security is at the heart of the implementation that we need to do right now with regards of the Agenda 2030 and the Paris Agreement to showcase these decisions are now being taken as concrete actions,” she said.

She went on to explain that Sweden not only supports the land rights of indigenous communities in Africa, Asia, and Latin America, but also right here in Sweden.

“In Sweden, steps are being taken towards safeguarding the livelihoods and culture of the Sami people, our indigenous community. The only indigenous community in the EU,” she said, adding that Sweden had a “very strong budget” for development cooperation in 2018.

“Sweden wants to be a leader in implementing the international commitments for sustainable development.”

Sweden is a strong supporter of development around the world, and is the third largest donor of assistance in relation to its GNI, or Gross National Income, surpassing the UN target of 0.7 percent of GNI.

“In these turbulent times, the Swedish government is steadfast in its ambitions to take our share of responsibility and to show the world that taking responsibility is also bringing possibilities for present and future generations”, added Modéer.

The initiative comes at a time when land rights defenders are in need of help – in September, 39 groups of activists from 29 different countries presented a letter to the UN asking it to act against violent corporate and state-sponsored groups.

Many land rights defenders have been killed or forced to flee, as the fight for the protection of the environment and local indigenous communities has become too dangerous. Local leaders and activists receive constant death threats, and refrain from travelling alone even in their own communities.

In 2016 alone, 200 indigenous leaders, environmental activists, and rangers were killed defending land rights and the environment, and in the first months of 2017 the count was already at 97.

“We live in a turbulent world,” Modéer cautioned.

“We have a lot of challenges ahead of us, challenges that we need to change into opportunities, and we need to do that through cooperation.”