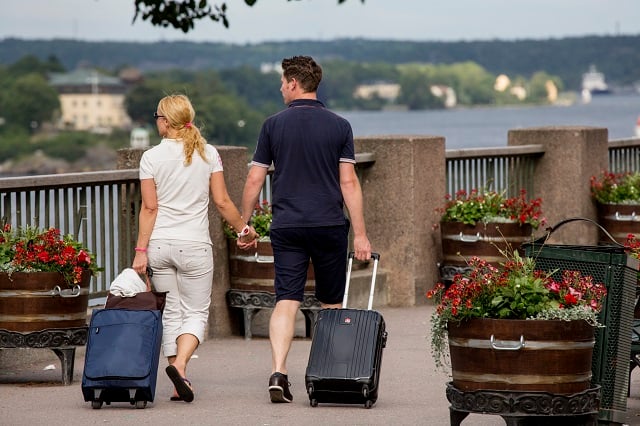 Tourists enjoy the view as they wheel suitcases along a Stockholm street. Photo: TT

“It is a good, stable growth,” said Björn Arnek, an economist working in the tourism industry.

“The unusually strong American dollar around New Year last year may have contributed to many Americans seeing Sweden as a good value summer holiday.”

The figures from the Swedish Agency for Economic and Regional Growth looked at the number of overnight stays in Sweden’s hotels, hostels, campsites, and other kinds of tourist accommodation.

In total, the number of foreign visitors rose by three percent, and despite the increase in American visitors, most tourists come to Sweden from Norway and Germany.

In the past five years, China is the country which has seen the biggest overall growth in tourism to Sweden, with the number of overnight stays made by Chinese tourists each year rising by 146 percent since 2012. In summer 2017, just over 172,000 tourists travelled from China to Sweden.

“The fact that so many people chose to visit Sweden is due to a range of factors, including more flight routes,” Eva Östling, the CEO of Visita, an employers' organization in the hospitality industry, told Swedish news agency TT.

She said other reasons behind the tourism boom were “the fact that the country is seen as safe and that there is a high quality of accommodation and food”.

PARTNER CONTENT
Winter escapes: treat yourself with a trip to the ‘Venice of the north’
Url copied to clipboard!