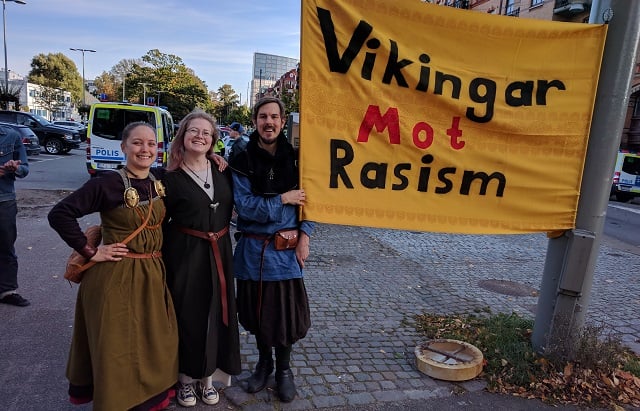 One of the groups which protested the march was Vikingar Mot Rasism (Vikings Against Racism), a network set up by Viking fans to challenge the use of Viking symbols by white nationalists.

“Viking enthusiasts get mistaken for racists and Nazis all the time, and we're very uncomfortable with that. White nationalists don't get to reinvent what Viking culture is,” says Solvej von Malmborg, an admin for the network's Facebook group who was at the march.

The network was first set up three years ago, after Swedish Viking enthusiasts noticed an increasing number of people with racist values had begun attending Viking-themed markets and other events.

“These events are meant to be open to everyone, and these people would turn up and that makes other people feel unwelcome,” von Malmborg tells The Local.

She first got involved in the Swedish Viking community through LARP (live action role-play) seven years ago, and says she has always found the community to be very inclusive.

Vikingar Mot Rasism (VMR) now numbers over 1,000 members; predominantly LARPers, historical reenactors, heathens, and others interested in the Viking Age, while there are other similar groups for archaeologists and historians. They share details of upcoming events where the group can spread its message, including Viking-related gatherings, far-right events such as the one in Gothenburg, and other demonstrations such as the Stockholm Pride march, in which members of the group have taken part.

“Vikings against improper use of the runic script” #göteborg pic.twitter.com/T4aNYK1NBJ

At Gothenburg, von Malmborg says the atmosphere among the groups of counter-demonstrators was like a “party” and a “huge contrast to what the Nazi march was”.

“People from all different backgrounds gathered with a common purpose to show we choose love and courage over fear and resistance to change,” she adds. She and other members of VMR spoke to several other counter-demonstrators to answer questions about the Viking enthusiast community, and to dispel myths about its association with the far right.

Symbols from the Viking era have been used by far-right movements for decades, including in Nazi Germany. And as extreme factions of the movement have gained prominence in Nordic countries as well as in America over recent years, so too has the misappropriation of Viking iconography.

READ ALSO: Why 2016 saw a surge in neo-Nazi activity

Thor's hammer and the Odal rune (ᛟ), which means 'heritage', have both been used as symbols by white nationalist groups, which often link Scandinavia to Aryanism and ideas of racial purity. Another example is the Týr rune, used by the Nordic Resistance Movement, the group behind the neo-Nazi march in Gothenburg.

Those who have a genuine historical interest in the Vikings are not just concerned about being mistaken for racists, but also fear that the symbols could fall out of use entirely.

“When a symbol becomes too closely connected with a racist movement, it becomes theirs – it belongs to the racists and eventually, using it can be seen as a form of inciting racial hatred. Then the symbol is removed from common cultural use,” says von Malmborg.

One way the group hopes to tackle this is by raising awareness about Viking culture, and von Malmborg says the image projected by white nationalist groups is largely based on myth.

In the 19th century, nationalistic movements spread across Europe, and this was when historians created the image of the Viking many of us are familiar with today.

“The National Romantics were looking for something exclusively Nordic, and they settled on the Viking age as a symbol for nationalism. They painted the era as a picture of strength, and later the Nazis wanted to be associated with strong civilizations so they used Viking runes and symbols – as well as the eagle from the Roman Empire, for example,” explains von Malmborg. Another common misconception of Viking culture, and one which is perpetuated by nationalist movements, is that men were viewed as superior to women. “We don't know a lot about gender roles in the Viking era but we do know that both men and women were empowered, and that there were female warriors, for example,” she says, pointing out that one Viking burial grave long believed to belong to a male warrior was recently discovered to belong to a woman.

Revisions such as this prove the need to be open-minded as to what historical finds might mean, argues von Malmborg, who says: “We should be aware that we will never know for sure what that culture was like, so we can't just project our own standards onto history.”

“There's a problem with history as a subject in general: we project our own culture and values onto the cultures we study,” she adds. “But that's not an accurate representation. We know that the Vikings had lots of intercultural relations, and positive ones too, which you don't often hear about. They were traders and mixed with cultures all over the reachable world.”

Von Malmborg says her own experience as a LARPer has helped her explore other, historical cultures in a deeper way, and she says that the opportunity to 'step back' from her own culture also forced her to look more critically at the world around her. She hopes that the work of Vikingar Mot Rasism will encourage more people to look critically at historical representations and be aware of possible problems with historiography.

“I wouldn't say we are 'reclaiming' Viking culture; we don't have any more right to this culture than others, but we don't want our interest to become associated with racist and Nazi values. We won't let them appropriate Viking culture and make it theirs.”