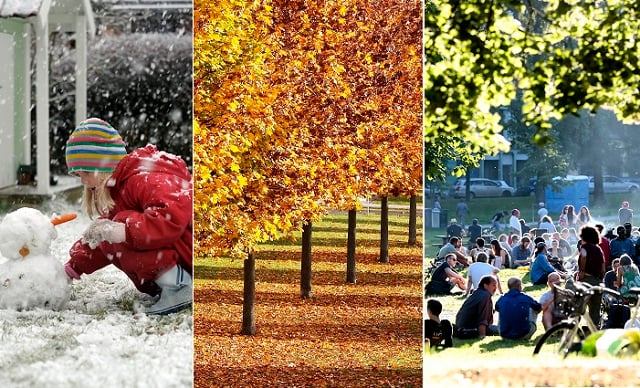 Winter, autumn, and summer in Sweden. All photos: TT

Autumn may have descended on most of Sweden, including the capital Stockholm, but in other parts of the country it's a different story.

In parts of southern Skåne and on the islands Öland and Gotland off the southeastern coast, locals are still enjoying summer temperatures, while in the mountainous regions of western Sweden, winter has already arrived.

Parts of Härjedalen and Dalarna in the central west saw temperatures of below 0C on Sunday and Monday, which in Sweden is classified as winter weather.

However, in order for the start of the winter season to be officially declared, the average temperature needs to stay below 0C for five consecutive days, and that hasn't happened yet.

Such variation is not uncommon in Sweden, and the country experienced three seasons simultaneously in early October last year.

In meteorological terms, Swedish autumn is defined as beginning when the average temperature for each 24-hour period remains between 10C and 0C for five days and nights.

But if the average for that period is over 10C, it is still considered as summer – even though it might feel quite cold – while an average of below 0C means winter has arrived. This means that some parts of southern Sweden never experience a meteorological winter.