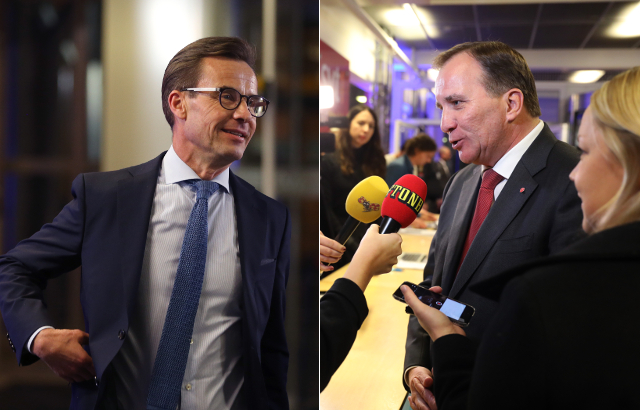 It was the first debate for opposition leader Ulf Kristersson, the new party leader of the centre-right Moderates after Anna Kinberg Batra's departure last month, and he immediately clashed with Prime Minister Stefan Löfven, the leader of Sweden's Social Democrat-Green coalition government.

Both agreed that the Swedish economy is doing well, but Kristersson asserted that the centre-left government is not taking issues such as integration seriously, as the pair began to exchange words.

“We've still got problems, but you're only talking about lower taxes,” countered Löfven in the debate broadcast by SVT, arguing that the centre-right proposal of low-wage entry-level jobs for new immigrants and others struggling to get a foot on the jobs ladder in practice cuts wages for many others as well.

“It's the third time you says 'lower taxes'. We have seen that it only creates higher unemployment and higher budget deficits,” said the Prime Minister, who wants trade unions and employers to negotiate entry-level jobs for new arrivals and agree on their wages, not politicians in parliament.

“You don't want to admit that the Swedish model has its flaws,” replied Kristersson.

READ ALSO: More news on The Local about the 2018 Swedish election

The leaders also debated neo-Nazi group Nordic Resistance Movement (Nordiska motståndsrörelsen, NMR), who marched in a violent demonstration in Gothenburg just over a week ago. After the debate, the TT news agency pressed them for answers about how to tackle it.

“I think we should seriously think about if their actions can be classified as terror crimes. The goal is to use violence and threats to overthrow the democratic regime in Sweden. That is actually what they want to do and that's a form of terror,” Left Party leader Jonas Sjöstedt told TT.

Sweden Democrat leader Jimmie Åkesson has previously referred to the NMR as a terror group.

“I think it is reasonable to look at the systematic use of violence, and that you possibly could classify it as terrorism and in that case classify this organization as a terrorist organization,” he said.

Löfven has called to a cross-party meeting – with the exception of the Sweden Democrats, who has seen some of its members linked to the NMR – to find common ground on how to tackle the issue.

“So that's the balance we have to find. What can be done within the framework of the legislation we have got today? And is further legislation needed?”