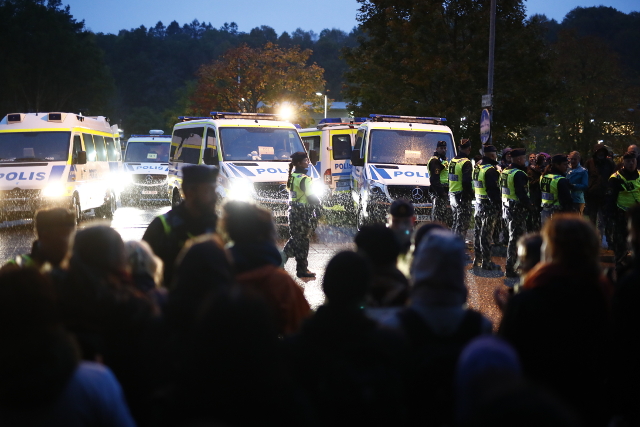 The chartered plane left Gothenburg’s Landvetter airport with ten Afghans, some of whom arrived in Sweden as unaccompanied minors, whose requests for asylum in Sweden were rejected, either because migration authorities ruled they were older than first stated or because they turned 18 while waiting for an answer on their asylum application.

But seven of those who had been scheduled for deportation were allowed to stay in Sweden pending further hearings. It is not unusual for planned deportations to be cancelled at the last minute, and this often happens because new information has come to light regarding the people in question.

For example, they may have been accepted at an institute of higher education, or have told authorities of an additional factor which they may not have previously felt able to share. The Swedish Migration Board said that one of the people concerned had been granted a new trial at the work, while another case was overturned at the request of an international court.

In total, three of the nine who who were deported had been ordered to leave the country due to crimes they had committed, according to Dagens Nyheter. The other six had had their asylum applications rejected. And one other person, whose asylum application had been rejected, was flown to Kabul but had to return to Sweden because Afghanistan refused to accept him.

More than 100 people had gathered outside the detention centre earlier in the day where the young people were being held by early afternoon on Tuesday to protest the deportations.

“Despite extensive protests from individuals as well as large organizations such as the Swedish Church, the Red Cross, Save the Children and Amnesty International, the Swedish government continues its forced deportations of young people to Afghanistan – one of the world's most dangerous countries,” Vian Delsoz, one of the organizers of the event, told The Local.

READ ALSO: 'How I fled from a Taliban training centre to Sweden'

Many of those protesting have personal relationships with the young Afghans. One of them, Nellie Lenting, described the teenager she took into her home, Mohammad, as her “Afghan son”, but said that once he turned 18, he was no longer allowed to live with her family.

“We met him in February and although at the start it's a bit difficult to get a new family member, he soon started to open up and we see him as our son,” Lenting told The Local.

“We've filed for adoption but that process takes a very long time. He had a job here but now he can't work — the detention centre is a bit like a jail.”

Lenting said that both of Mohammad's biological parents were killed when he was young, he had worked in harsh conditions since the age of eight in his home country, and suffers from PTSD.

“But that's only one tragic story, and there are many – no one deserves to be deported to a country like Afghanistan,” she said. “I'm not only here because of my very personal connection but because Afghanistan is one of the most dangerous countries in the world, with casualties every day. Some we hear about and some we don't.”

Five refugees were able to stay behind at the detention centre on Tuesday, after authorities ruled their asylum application was to be looked at again before a deportation can go ahead. But around ten were on the bus taking them to Landvetter Airport, where the plane for Kabul took off at around 10.30pm. Last Thursday, Amnesty International published a new report saying that the deportation of minors to Afghanistan went against international law and should be stopped immediately, due to the security situation in the country.

The Swedish Migration Agency's official stance on Afghanistan is that safety varies between the country's different provinces and that “it is still possible to return to several areas”.

In May, Fredrik Beijer, head of the Migration Agency's legal department, said the agency was monitoring the situation in Afghanistan, but did not confirm any imminent policy changes.

In a statement sent to The Local at the time, Beijer said: “The situation in Afghanistan is serious and has deteriorated in the past year. The security situation however varies between and within different provinces. We note that there is an internal armed conflict in Kabul among other places, with repeated serious attacks. Many asylum seekers from Afghanistan may therefore stay in Sweden, but the situation is not such that everyone is entitled to protection. Each case is assessed on an individual basis.”

In August, hundreds of young Afghans held a sit-down protest against the deportations in Stockholm, which lasted for several weeks. They were joined by hundreds of members of the public, and Swedish teachers have also protested the planned deportations.

Following the protests, Sweden's parliament debated how to respond, with the Social Democrats dismissing the demands, but the Green Party – the other party which makes up Sweden's coalition government – arguing that the refugees should be given a chance.

One issue is that unaccompanied minors can only be deported if family members or other guardians can give them a home, however due to long processing times, several Afghans who arrived as minors have since turned 18, and are therefore treated as adults.