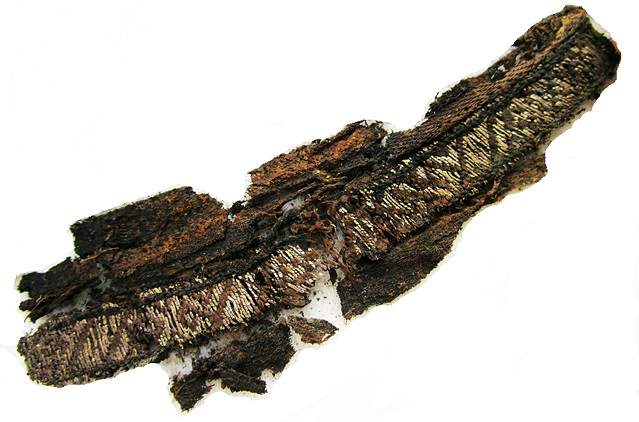 One of the woven silk bands. Photo: Annika Larsson

The silk costumes were found in boat and chamber graves but had been kept in storage for decades, believed to be typical burial clothes with Viking Age patterns, until archaeologist Annika Larsson took a closer look.

“This is a very important discovery because it tells us we can't view this historical period as 'typically Nordic',” Larsson, a textile archaeologist at Uppsala University, told The Local on Thursday. “It shows us that the Vikings were in close contact with other cultures, including with the Islamic world.”

Her research shows that the patterns on the silk are Kufic characters, a form of Arabic script. The patterns invoke both Allah – whose name is written in mirror image and was therefore initially hard to decipher – and Ali, the cousin of Muhammed and fourth caliph of Islam.

A large amount of silk has been found in Viking graves across Sweden, which Larsson says comes from central Asia and often contains Persian motifs.

But while some researchers have suggested the silk found its way to the graves due to plundering and trade, its presence could imply a deeper connection between the Vikings and the Islamic world. For example, Larsson argued that the fact it was so often used in burials may show that Vikings were influenced by the Koran, which states that inhabitants of paradise wear silk.

It is also revealing because while everyday clothing had a practical function, burial garments give clues into the values and beliefs people held. Larsson said it was even possible that the inhabitants of the graves were Muslims, or at least heavily influenced by Islam.

“Of course there were trade relationships, but if you trade a lot over a long period, you start to take in cultural values,” the researcher said. “Objects aren't just dead objects – they represent something. In particular I think the idea in Islam of eternal life and paradise really appealed to them. We have written sources that attest to that, and it could be that the Vikings took this idea from the Islamic world.”

“We also talk a lot about how Vikings went to Asia for trade, and we never speak about the people who came back, but maybe there were Muslims who came to Sweden at this time,” she added.

As part of the same project, analysis is being carried out on the inhabitants of the graves to look at factors such as their geographic origin and discover how integrated the Vikings were.

So why did researchers misinterpret the characters for so long?

Larsson says the original analysis of the silk was done during the Second World War. “At that time people were very Nordic-focused ideologically, and I think they just weren't able to see beyond that world at that time. Afterwards, scholars accepted that those researchers were right, but now I've checked it, I have proof that it's not true. This is why it's important to keep challenging historical research.”

The archaeologist points out that the research could help with efforts to disassociate the Vikings from white nationalist groups, many of whom use Viking runes and symbols. For example, Thor's hammer and the Odal rune (ᛟ), which means 'heritage', have both been used as symbols by racist groups, which while the neo-Nazi Nordic Resistance Movement uses the Týr rune.

HISTORY
Did you know? The Scandinavians never spoke of themselves as Vikings