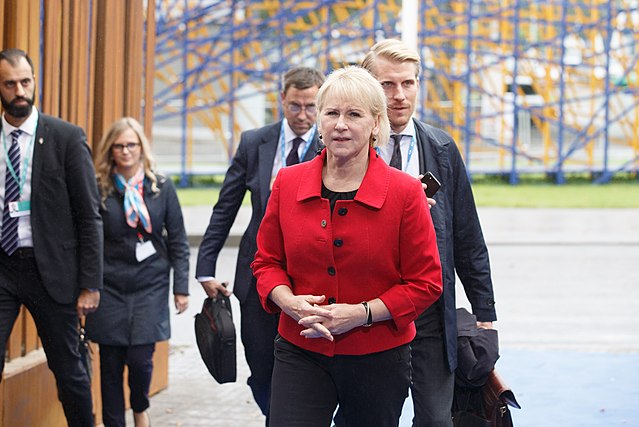 With a strong female foreign minister in Margot Wallström, who in turn is pushing a ‘feminist’ foreign policy, it’s no surprise Sweden has a reputation of having a strong gender balance in the diplomatic ranks.

However, that wasn’t always the case.

Sweden, along with most other countries, banned women from diplomacy until well into the 20th century.

It wasn’t until the 1920s that women became accredited diplomats, and the United States’ first female diplomat served in Denmark in 1934. In Sweden, the ban on women in diplomacy was not lifted until 1948.

“Sweden was rather late in lifting the ban on female diplomats – 20 to 30 years behind several other states,” explains Ann Towns, an Associate Professor of Political Science at the University of Gothenburg.

While Sweden may not have been the first country to allow women to enter diplomacy, it was the second country in Europe to appoint a female foreign minister when Karin Söder of the Centre Party held the position from 1976 to 1978.

Since 1991, Sweden has had six female foreign ministers including Wallström, who together have served more than 16 years – something that Towns believes likely has an impact on female representation in diplomacy.

“Seeing a woman in power changes how we view power,” she explains.

“Strong and vocal female foreign ministers like Margot Wallström – and other women in leadership positions – have important effects.”

And as more women have entered diplomacy in the last 20 years, Towns, along with her colleague Birgitta Niklasson conducted a study to explore “the gender norms shaping the work environment of diplomats and the ways in which this has changed with the entry of women”, she added.

“Where are the men and women in diplomacy with respect to positions of status and power?”

For their study, Towns and Niklasson examined more than 7,000 ambassadorial appointments from the 50 richest countries in the world to get a better picture of where men and women ended up in diplomacy with respect to positions of status and power.

While their study revealed that only 15 percent of ambassadorial postings went to women overall, changes are indeed afoot.

“The recent entry of large numbers of women constitutes a rather dramatic change in the sexual make-up of various MFAs and diplomatic corps,” says Towns.

There was also considerable regional variation, with women making up 35 percent of ambassadors from the Nordic countries, compared to only 10 percent from Asia and six percent from the Middle East.

The researchers also found that male diplomats were overrepresented among more high-profile postings to wealthy countries.

When looking at the status of ambassadorial posts to which women were appointed, the researchers discovered a common theme: the percentage of male ambassadors is greater for postings to countries with large economies and powerful militaries.

In other words, Towns explains, “women that are appointed as ambassadors are underrepresented in the most prestigious postings.”

While her research didn’t specifically explore the reasons behind the increasing numbers of women in diplomacy, Towns has a theory.

“Much of this, I think, is part of the general trend of women entering into all sorts of arenas that were previously male dominated or reserved for men only,” she explains.

“But there is no reason to think that there will be equal representation in top positions automatically if we just give it time.”

Among other things, male-dominated networks, persistent stereotypes about women, and even sexual harassment can all keep women from advancing through the diplomatic ranks.

But the fact that 40 percent of Sweden’s ambassadors are women and that Karin Olofsdotter was recently appointed as Sweden’s first female ambassador to the United States, shows that, despite getting a late start, the country is now at the forefront of promoting women in diplomacy.

“Sweden is good evidence that increasing the numbers of women can be done,” says Towns, who says there isn’t anything “exceptional” about Sweden that would prevent similar developments in other countries.

“Sweden should NOT be seen as evidence that this cannot be done elsewhere.”

“You're part of a fundamental transformation of diplomacy, away from its all-male roots,” she says.

“Be cognizant of gender patterns in your environment and work to transform them.”