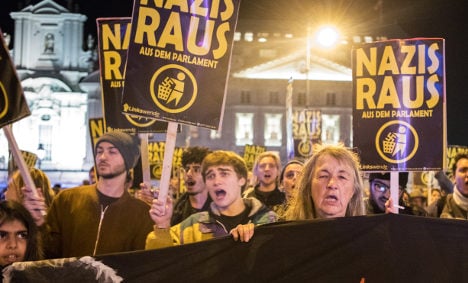 A far-right party has also had some success in Germany, in September becoming the first such party to enter the Bundestag since the end of World War II, but their counterpart in France is faring less well.

Here is a snapshot of some of the far-right parties in Europe.

The eurosceptic and anti-immigrant Freedom Party (FPOe) came close to winning the presidency in December, which would have made its leader the European Union's first far-right president.

One of Europe's most established nationalist parties, it is forecast to come second or third in this weekend's vote and could become junior coalition partners to the favourites, the conservative People's Party (OeVP).

Founded in 1956 by ex-Nazis, the party earned a stunning second place in 1999 elections with nearly 27 percent.

The openly anti-immigration and Islamophobic Alternative for Germany (AfD) is the third-biggest party in the Bundestag after the September election, a political earthquake for post-war Germany.

The party took nearly 13 percent of the votes, having failed in the 2013 election to make even the five percent required for representation in parliament.

It has more than 90 seats on the benches of the parliament that meets for the first time on October 24.

This was double her father's 17.8 percent score when he reached the second round in 2002.

In campaigning, Le Pen vowed to abandon the euro, reinstate control of the nation's borders and curb immigration if she won.

But the party fared badly in June parliamentary elections, taking just eight seats out of 577.

Tensions since then burst into the open when Le Pen's right-hand man Florian Philippot quit and looks set to go his own way.

The anti-Islam Freedom Party (PVV) of Geert Wilders in March became the second party in parliament, with 20 seats in the 150-member parliament.

The Movement for a Better Hungary, known as Jobbik, is ultra-nationalist and eurosceptic. It is the second largest party in the legislature but has been outflanked by Prime Minister Viktor Orban's own hardline anti-immigration stance.

The Northern League is a “regionalist” formation that evolved into an anti-euro and anti-immigrant party that secured 18 seats in the 2013 parliamentary election.

The next general election must be held by spring 2018 and the party is hovering at around 14 percent of voter intentions.

The neo-Nazi Golden Dawn finished third in the September 2015 election, with seven percent of the vote and 18 MPs. One later defected and the party is now the fourth biggest in parliament.

The Sweden Democrats party, with roots in the neo-Nazi movement, made a breakthrough in September 2014 to become the country's third biggest party with 48 of 349 seats and nearly 13 percent of the vote.

The nationalist United Patriots coalition entered government for the first time in May after coming third in a March election. It is the junior party in the governing coalition.

In March 2016 the People's Party Our Slovakia benefited from Europe's refugee crisis to enter parliament for the first time, winning 14 seats out of 150.