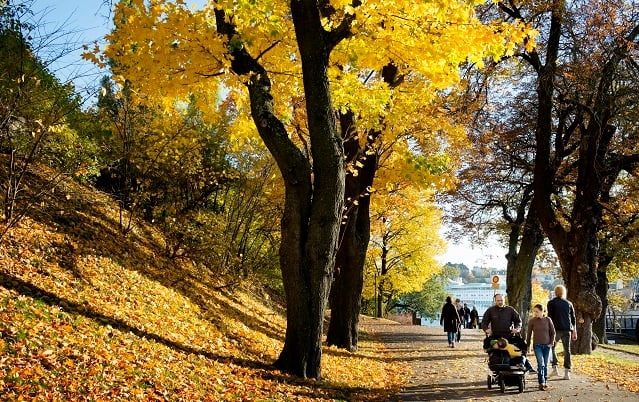 People taking a walk on a sunny autumn day in Stockholm. Photo: TT

“It's not out of the question that we'll see 17-18C,” said Lasse Rydqvist, a meteorologist at Sweden's Meteorological and Hydrological Institute (SMHI).

A wave of heat has swept across the southern half of Sweden with parts of the country waking up to temperatures of 14-15C on Monday.

“This isn't totally normal for mid-October,” said Rydqvist. “Today we'll see how warm it gets.”

The wave of relative heat has been brought north from the Iberian peninsula and West Africa, leading to an Indian summer. Swedes call the phenomenon a 'Brittsommar' after Saint Bridget of Sweden ('den heliga Birgitta', or Britt for short), whose national day falls on October 7th.

But anyone out and about in Sweden should keep their winter coat to hand, because the temperatures are set to drop again soon.

Rydqvist warned that the warm spell would reach its end on Monday. “It's reaching its climax today. It might be quite warm tomorrow too; it's not impossible that in the same area we'll approach the 20C mark, but towards the end of the week it will get colder,” he said.

He added that occasional bursts of heat were not altogether unusual in October, and said the weather was unlikely to break any records.

But compared to the usual daytime temperatures, it is still well above the average for the time of year.