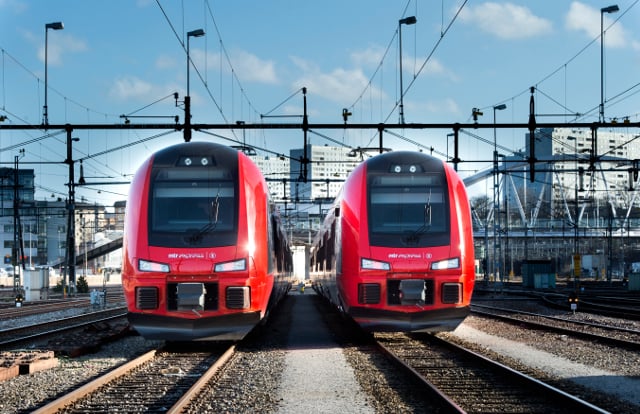 MTR Express trains (not the train mentioned in the article). Photo: Pontus Lundahl/TT

As The Local reported earlier this year, a competition to name transport company MTR Express' new express trains on the Stockholm-Gothenburg line resulted in Trainy McTrainface emerging as the winner.

It was a nod to the outrage in the UK following the overruling of a public vote to name a British polar research ship Boaty McBoatface, but in Sweden MTR Express promised to let the public decide no matter what.

“I can guarantee with my life that the train will be called Trainy McTrainface,” its marketing chief Per Nasfi told The Local at the time.

The train was set to get its name at an official naming ceremony at Gothenburg's central station on Tuesday. Some of the other names picked are Ingvar (after TV host Ingvar Oldsberg), Estelle (after the young Swedish princess) and Glenn, a reference to the high number of 'Glenns' in the two-time Uefa Cup winning IFK Göteborg team of the 1980s, such as local heroes Glenn Hysén and Glenn Strömberg.

Asked in July if MTR Express suspected that Trainy McTrainface would be the outright winner of the poll when it was launched, marketing head Nasfi admitted it was clear early on, and that the vote also registered beyond Swedish shores with BBC and CNN among many media outlets covering the news.

“We saw pretty quickly that Trainy McTrainface was in the lead and the popular option. There was a bit of international attention on the vote, and I imagine that some people were quite delighted to get some revenge for the Boaty McBoatface thing,” said Nasfi.