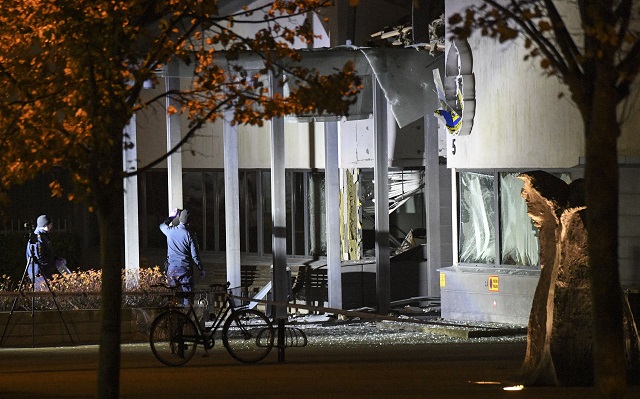 A large part of the building and even the windows on the building opposite were damaged by the force of the blast, though nobody was injured.

“This is very serious. An attack on the police is not just an attack against society, but on everyone's safety,” Sweden's National Police Commissioner, Dan Eliasson, told TT.

The alarm was raised shortly after midnight, and there was severe damage to both the entryway and the inside of the building.

“The whole entrance has been blown away. The windows are shattered and there's damage to the doors themselves,” said Lennart Linderos from the regional emergency services.

On Wednesday morning, bomb technicians had finished their survey but other technicians were still at work.

Åsa Emanuelsson, a police press officer, said that the rest of the property would be investigated during the day.

“It has suffered extensive damage, but exactly how much, we don't know yet,” she said.

Local residents said the explosion was powerful. “I was in my kitchen and felt the apartment shake. It felt as if someone had thrown something at my balcony,” a resident told Helsingborgs Dagblad.

Others reported their windows rattling and entire apartments shaking.

The head of the local police, Patric Heimbrand, told reporters that investigators were working on the presumption that “criminal circles” were behind the attack. He said police work against gangs was paying off and likely causing “irritation”.

Explosives are often used by organized crime rings in Sweden, especially in the south where settling of scores and intimidation are frequent among drug traffickers.

Police and judges are also regularly targeted. On November 30th, 2014, a blast damaged a building in the southern city of Malmö that housed police, prosecutors, a courthouse and a penitentiary administration.

Heavily armed police officers were stationed outside those buildings on Wednesday.