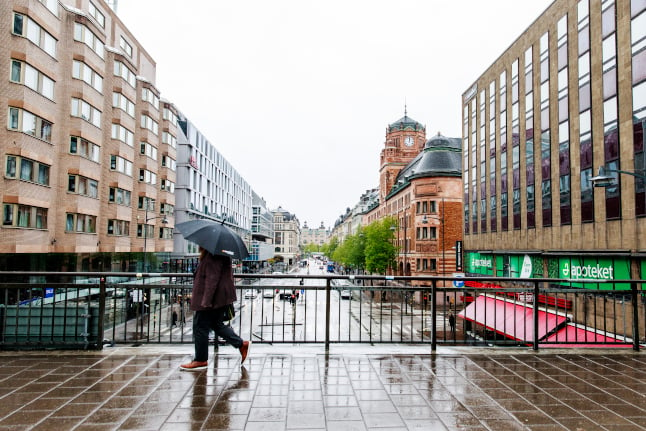 But there are plenty of other weather phrases in the Swedish language that describe all situations from strandväder (beach weather) to regn och rusk (rain and nasty weather).

In summer, you’re probably hoping for vackert väder (beautiful weather), with solsken (sunshine) and grillväder (barbecue weather) on those ljumma (balmy) evenings. Dygnsmedeltemperaturen (the average daily temperature) will rise thanks to the högtryck (high pressure), causing you to feel a bit svettig (sweaty), and northern Sweden will experience midnattssol (midnight sun, when the sun doesn’t set in summer).

In sensommaren (late summer), there may be some åska (thunder) and blixtar (lightnings), but if you are lucky you might see a regnbåge (rainbow).

If the warm weather lasts into early October, it is called Brittsommar (Indian summer, literally Britt summer) after Saint Bridget of Sweden, whose national day falls on October 7th. Come autumn the weather will turn grått och trist (grey and dull), mulet (overcast), molnigt (cloudy), and blåsigt (windy). It’s time to get your paraply (umbrella) out, and maybe even your regnjacka (rain coat) and gummistövlar (wellies).

Low-lying dimma (fog or mist) over fields is sometimes referred to as älvdans (fairy dance).

If it’s raining cats and dogs you say that regnet står som spön i backen (literally, the rain stands as rods on the hillside).

November will be here sooner than you think, and it might prompt you to exclaim Usch! Vilket väder! (Ugh! What miserable weather!) or even Vilket jävla skitväder! (literally, and apologies to readers, What devilish shit weather!).

If Anders braskar, julen slaskar. That means that if the weather is rainy with plenty of slask (slush) on November 30th, Saint Andrew’s Day, the saying goes that there will be a vit jul (white Christmas). Finally, it’s winter and snöflingor (snowflakes) will start to fall. As you might imagine, there are plenty of words for snow in Swedish, including blötsnö (wet snow), pudersnö (powder snow), nysnö (new snow) and snömodd (slush, but often mixed with mud and not as far along in the melting process as slask).

Kramsnö literally translates as “squeeze snow” and refers to snow that is just wet and firm enough to make excellent snöbollar (snow balls).

Skare refers to the crisp surface on snow, which is formed when the top layer melts and then freezes again.

READ ALSO: All the things they don’t tell you about the snow in Sweden You think that it is never going to end, but sooner or later you will see the first dagsmeja, when the sun is strong enough to melt the snow or ice, despite it still being below 0C.

That’s when you know that tö is on its way, when the mercury edges above 0C and the snow melts, causing vårflod (spring flood) and islossning (when the ice breaks apart).

Enjoy the vårsol (spring sun)! Finally, remember to inte tala om den snö som föll ifjol (not talk about the snow that fell last year, meaning that you should let bygones be bygones).

READ ALSO: Springtime in Sweden, words you need to know